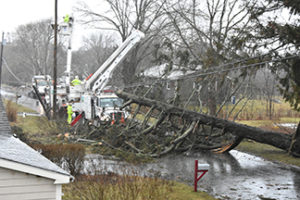 An Eversource crew works on restoring power after a huge tree knocked out power lines on Smith Street on Sconticut Neck in Fairhaven on Friday, 3/2/18. Another tree then fell in front of this one, also on 3/2. It took the town until Monday, 3/5, to clear the road, although power was restored on 3/2. Photo by Beth David.

A powerful northeast storm knocked out power for hundreds of thousands in Massachusetts last week. Striking on Thursday night and lasting well into the weekend, winter storm Riley, knocked down huge trees, took off roofs, and knocked down power poles all over New England. Extra large “moon tides” added to the drama, with waters of the Atlantic breaching seawalls everywhere. Locally, the West Island causeway saw some very deep flooding at the 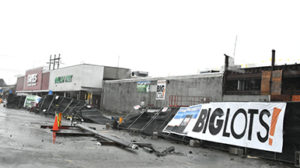 The construction fence gives in to punishing winds on Friday, 3/2/18, in the Plaza Way parking lot in Fairhaven, where construction continues on the new Big Lots store next door to the new Tractor Supply which just opened up in the old KMart space. The nor’easter packed a powerful wallop and socked the region with high winds, lots of rain, and big wave action. Photo by Beth David.

usually spot, the bottom of Causeway Road. Water splashed over the causeway, impair­ing visibility, but most people drove through it anyway.

Wind gusts of 69 MPH were recorded on West Island, up to 89 MPH on Nan­tucket. Debris and floating docks were tossed around by wind and waves for three days.

The rain was heavy, dumping nearly three inches of rain locally on Thursday. Widespread power outages and big rains caused a lot of local flooding in basements and around town. The local fire departments were busy pumping out basements through­out the storm. Acushnet fire reported fielding dozens of calls during the strom to pump out basements. 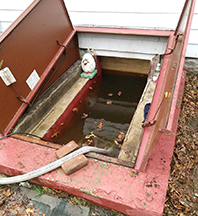 According to the Acushnet Fire and EMS Facebook page, “Beginning Fri­day 3/2/18 at 1:30 p.m. through Sunday 3/4/18 at 11 p.m. the depart­ment responded to 86 requests for assistance. House fire, several carbon monoxide detectors, ambulance runs, pole fires and more flooded base­ments than we have ever seen!”

Acushnet opened the Senior Center as a warming center and stayed open all night on Saturday until 3 p.m. on Sunday. COA Director Heather Sylvia said that 15 to 20 people took advantage of the center to charge electronics and warm up. She said two people stayed overnight. By Sunday, they had one family left without power or anywhere to go. They went to a hotel, she said, then found out they had their power restored on Sunday evening.

On Smith Street in Fairhaven, neighbors were forced to drive across a lawn and “paper street” to get out. Two large trees fell across the Smith Street on Friday, 3/2, right near Sconticut Neck Road, blocking every single house on Smith Street.

According to residents, the road was not opened up until Monday afternoon. Eversource was on scene on Friday with line workers up in the air in high winds working on the poles. But the town’s Tree Warden seemed to have difficulty with the task, with town public works workers and the Tree Warden Brian Bowcock, not able to free the street for three days. 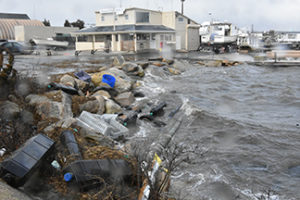 Even with the worst of the storm over, flotsam continues to collect and get battered against the rocks at Earl’s Marina in Fairhaven on Saturday, 3/3/18. The storm hit on Thursday evening, but packed its biggest punch on Friday, and lingered until Tuesday. Photo by Beth David

As of press time on Wednesday most customers had their power restored, including all Cape Cod towns having fewer than 100 customers without power in each municipality. Closer to home, Marion hit the jackpot with 533 customers still without power on Wednesday, six days after the storm hit. 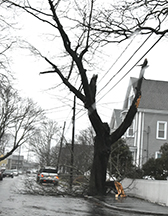 The center of Fairhaven was not spared the wrath of the storm, taking down a large branch of this tree on the corner of Cottage and Laurel Streets. Photo by Beth David

In Fairhaven all Eversource cus­tomers had power restored according to the outage map. Dartmouth still had eight without power; Wareham had four without power; Acushnet, Rochester and Westport each had two customers waiting for power to be restored; Matta­poisett and New Bedford had one each.

To check on outages, visit www.eversource.com and click on “Outages and Storms” at the top of the page.

The region was bracing for another nor’easter at press time, expected to hit on Wednesday night. Although predicted to be less severe than the last one, the wet ground and wind from the previous storm have left many trees vulnerable. 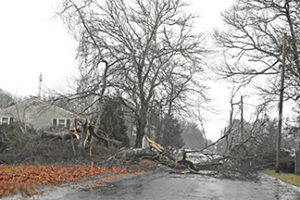 This tree on Ebony came down early in the storm on Friday, 3/2. Photo by Beth David. 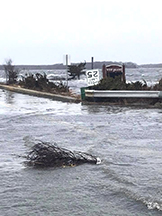 The speed limit sign at the bottom of Causeway Road gets flipped by the high winds on Friday, 3/2/18, as the road gets washed out by the tide. Photo by Marianne Brodo 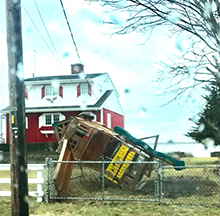 A children’s playhouse on Balsam Street on West Island gets toppled by the wind. Photo courtesy of Marianne Brodo

“The town at its best! All cleaned up! Thank You!” wrote Kim Sylvia in an email on Saturday, 3/3, that accompanied these photos of a large tree that came down in the storm on Sycamore Street in Fairhaven. Photos courtesy of Kim Sylvia. 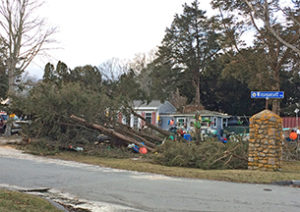 This stand of cedar trees at the corner of Winsegansett Avenue and Sconticut Neck Road came down in one fell swoop during the storm on Friday, 3/2/18. Photo by Beth David. 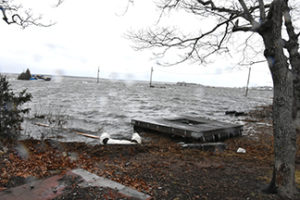 A floating dock gets washed up into a yard on Goulart Memorial Drive in Fairhaven during the storm on Saturday, 3/3/18. Jack’s Cove Marina is completely washed out in the background. Photo by Beth David.