The annual Fort Phoenix Polar Plunge in Fairhaven had 159 registered partici­pants, but hundreds watched them run into the January water at 10 a.m. on 1/1/23. The balmy 54 degree temperature felt a bit colder because of a 13 mile per hour wind, but it was still warm by Polar Plunge standards, and so was the water temperature at about 41 degrees. This year’s theme was “Under the Sea,” and participants were encouraged to dress the part.

The bright sun added to the upbeat mood as people milled around the shoreline waiting for the word to go in. However, the sound system was not working right and those at the edge of the water were taken by surprise when the crowd started to run towards them.

The Boucher family took a few pictures as they waited for the word, with dad Jason saying he has plunged for at least five years. Mom Julie said she was happy to be the photog­rapher and stay on land, while daughters Emma and Maggy said they were excited and scared at the same time to plunge for the first time.

“It was wonderful,” said Ms. Walker after the plunge.

People from 29 municipalities registered for the plunge this year, from Fairhaven to Cary, NC.

The plunge is held is honor of domestic violence victims. Registra­tion is free, and proceeds from t-shirt sales go to Fairhaven Dollars for Scholars, providing scholarships to high school seniors.

Select Board member Charlie Murphy, who played emcee, thanked the Fairhaven Fire Department for being at the ready with paramedics and an ambulance; the Emergency Manage­ment Agency which lent its sound system; the Fairhaven Police Depart­ment; Mass. Department of Conserva­tion and Recreation, which has jurisdiction over the state reservation/beach; Sherry and Bud Wilson, and Kathy Lopes, who organized the event. 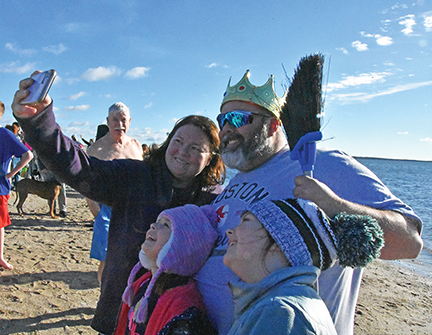 L-R: Julie Boucher takes the selfie with her husband Jason and their children, Emma and Maggy, just moments before the annual Polar Plunge at Fort Phoenix in Fairhaven on 1/1/23. Photo by Beth David. 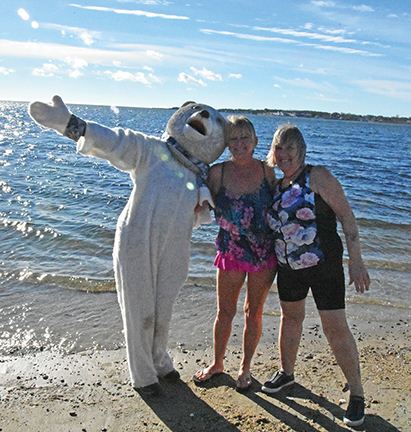 L-R: Our own local Polar Plunge Bear poses with Evelyn Bouley and Karen Pratt just moments before the annual Polar Plunge at Fort Phoenix in Fairhaven on 1/1/23. Photo by Beth David. 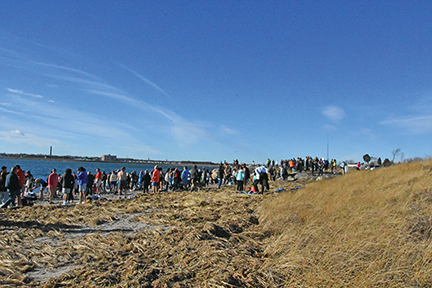 Hundreds of spectators and participants line the beach before the annual Fort Phoenix Polar Plunge in Fairhaven on 1/1/23. Photo by Beth David. 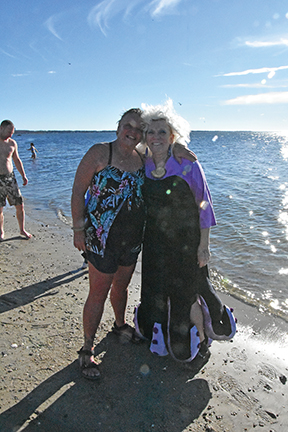 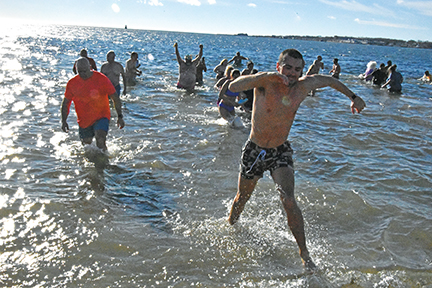 Participants of the annual Polar Plunge at Fort Phoenix head out of the water after charging in at 10 a.m. on 1/1/23. Photo by Beth David.