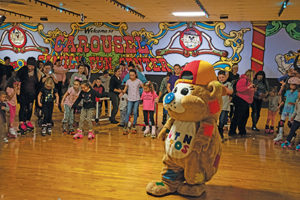 Buttons, aka David Gomes, puts his right foot out leading the crowd in the Hokey Pokey on 11/11/19, the final day of operations for Carousel Family Fun Center in Fairhaven. Photo by Glenn C. Silva for the Neighb News.

On November 11, 2019, Charlene Conway addressed the skaters that had stayed till the end over the public announcement system at Fairhaven’s Carousel Family Fun Center. She thanked everyone for the good times and all the memories.

“Even though we are closing this location, you can still come up and visit us at out Whitman location,” she told the crow. “It’s not that far away and just up the highway.”

Skaters packed the floor, the arcade, and there were even long lines at the concession stand for most of the afternoon. Plymouth radio station Easy 99.1 WPLM was there to live broadcast the final day with Program Director Scott Reiniche and staff.

There were a lot of lasts. The last backward skate; the last Hokey Pokey led by Buttons, the Carousel mascot; and then the last dance itself.

Minutes after 5 p.m. Charlene took to the mike one final time, asked the skaters to clear the floor, and invited those without skates on to dance on the skate floor under the lights, “One last time.” 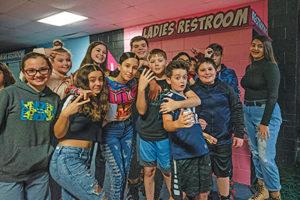 A group of locals all from Fairhaven, Acushnet, and New Bedford pose for a picture on 11/11/19, the final day of operations for Carousel Family Fun Center in Fairhaven. Some have been skating there for as long as they can remember saying it was always a place to “hang with friends.” Photo by Glenn C. Silva for the Neighb News.

People took selfies and videos throughout the day but it was when Buttons came out to do the Hokey Pokey with the kids that the cell phones make their presence known.

Buttons, aka David Gomes, has been working at Carousel since 1992. He started working in the arcade and in the skate room but ended up doing a little of everything including taking on the roll of Buttons.

While he could not pin point one special memory he said it was the people that made the place “special.” And even though he is going to miss it he is going to enjoy his retirement.

Yvette Randall who lived in New Bedford and now lives in Rochester has been skating here since it opened when she was a teenager. Her kids skated here and so did her grand­children who were out there on the floor with her son.

“Birthday parties won’t be the same, we always came here,” said Ms. Randall. “That’s what I’ll miss the most.”

Her parents and great grand­parents would go to watch every­one skate.

Sean Rodrigues, 27, from Fall River, has been skating there for 22+ years. Accompanied by his mom Fatima who helps out, as Sean has a disability. 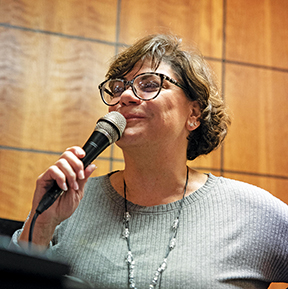 At the end of the night owner Charlene Conway thanks everyone for their support over the years, after the final skate on 11/11/19 at Carousel Family Fun Center in Fairhaven. “After 25 years we sure have made a lot of memories. And remember we still have our place in Whitman and it’s not to far a drive. Come out and see us,” she said. Photo by Glenn C. Silva for the Neighb News.

“When he was about five years old we started bringing him here every weekend for six months straight,” said Sean’s mom. “That’s how he learned to skate. Sean loves to be here and he loves to be out there skating with all of the people. He just belongs and fits in. He loves it here. We will definitely try to make it to the other location.”

Christopher Miller, 10 of Brockton had been skating there since he was four or five.

Teacher/skater Maurine Rodrigues will miss being with the kids, watching them grow and progress in their skating. It was a way to stay connected with kids, she said. Maurine herself was seven years old when she started skating. Charlene was her teacher.

“It’s funny how Charlene taught me how to skate and I became a teacher here myself,” said Ms. Rodrigues.

She plans on going to Whitman with her three children.

As Cotton Eyed Joe faded from the speakers and the lights dimmed one last time, Ryan Tavares, a first national champion teacher, took to the floor for a few final laps He had been an employee at Carousel since day one and needed just those few last laps to say a final farewell to an all too familiar floor.

Ms. Conway has announced that she is selling the building, but has not named the potential owner. However, Jerry Rogers of Falmouth Climate Controlled Storage in Falmouth sent a letter to town officials saying he wanted to buy the building, and was looking for some zoning relief to build a self storage facility at the location. The letter was read into the record at the 9/23/19 Selectboard meeting and was also discussed at a Planning Board meeting.