The owners of a Castle Avenue home in Fairhaven that had racist graffiti spray painted on the fence, is publicly thanking the commu­nity for an outpouring of support. The couple is still afraid to be named publicly, though, until the culprit is caught, and they are sure it was not a hate crime. After some investigating, the Fair­haven Police Department said it was revising its focus and decided the the incident was probably not a hate crime, but just graffiti by someone who did not realize how serious the words were.

“Kill a N_ _ _a like a care package,” read the words. Police have subsequently discovered that the phrase is from a rap song. Also, the area is used as a short-cut by a lot of young people, and the stockade fence obscures the house, making it seem less likely that the perpetrator even realized there was a house there, or that a Cape Verdean family lived there. 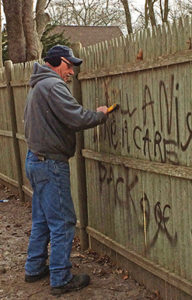 Gary Lavalette cleans off racist graffiti on a fence at a house on Castle Avenue in Fairhaven on 1/18/19. The comment, “Kill a N–––a like a care package” rattled neighbors and rallied the community behind the owners. Mr. Lavalette volunteered to clean off the graffiti, he said, because he felt “really bad” about it. Submitted photo.

After the incident, an outpouring of support, sprinkled with a fair amount of outrage, spread on social media.

Gary Lavalette, who is known around town as an accomplished graffiti remover for his work keeping Fort Phoenix graffiti-free, volunteered to clean off the fence. He said he was able to wash off the paint and did not have to power wash it.

“I can’t believe these young kids have no respect or pride for their town!” said Mr. Lavalette in a Face­book post.

The owners of the home sent a state­ment to the Neighb News by email.

“First and foremost we would like to thank Mr. Gary Lavalette for coming to our home on a very cold morning and removing the nasty graffiti from our fences,” wrote the couple in a joint statement. “He so graciously volunteered to do so. From the bottom of our hearts we thank you! We need more people like you in our town. Thank you! Thank you! Thank you!

“We thank our family and friends, the neighbors who called or personally came by, you know who you are, and to those in our community for their encouraging words of support!

Police are still looking for the person who vandalized the fence. If you have any information, please call the Fairhaven Police Department, at 508-997-7421.