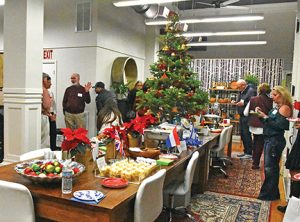 The table is set with foods from around the world at the Howe Allen Realty open house on 12/8/22 featuring cuisine from their agents whose ethnicities span the globe. Photo by Beth David.

Howe Allen Realty invited the public to an open house on 12/8/22 featuring tasty delights from all over the world, highlighting the diversity of its agents.

Owner Howe Allen said that all the food at the event came from Howe Allen Real Estate Agents and reflected their various ethnicities. Included were foods from Greece, Germany, Norway, the UK, Sweden, Ireland, Israel, Italy, Mexico, and the U.S. (hot dogs, of course).

The office is located in the Masonic Lodge building on the corner of Center and Main Streets in Fairhaven, and Mr. Allen said he also welcomed the opportunity to allow the public to experience the beautiful building. 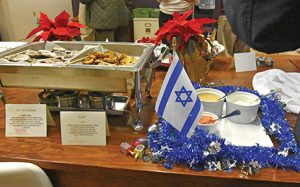 The Netherlands (LEFT) and Israel are side by side, featuring the traditional Dutch treat poffertjes and the latkes of Hannukah at the Howe Allen Realty open house on 12/8/22 featuring cuisine from their agents whose ethnicities span the globe. Photo by Beth David.