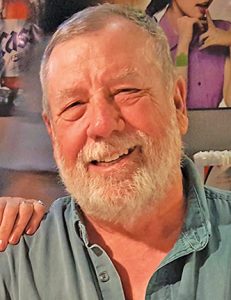 James P. Booth, age 76 of Fair­haven, passed away Friday, De­cember 2, 2022 after a brief illness. He was the husband of Veronica G. Booth to whom he had been married for 37 years.

Born in Corvallis, OR, the son of the late James W. Booth Jr. and the late Kathren L. (Gannon) Booth, he was active in outdoor sports, climbing, hiking, and when it was too cold, skiing.

He met his first wife, Jeanette, while ski racing, and eventually had daughter Rebecka. Jim would go on to work for the Forest Service building trails and fighting fires in the summer and running ski patrol in the winter, before teaching himself how to code and programming some of the first ATMs on the West Coast.

Jim then moved East to teach computer programming, where he eventually met Veronica and her son Jonathan. After quickly falling in love, Jim and Veronica were married on Valentine’s Day in 1985, settling their family in Fairhaven, MA.

He loved sketching detailed wooden boat designs, which he would then build from scratch from his basement. He loved camping and nature and was a constant fixture at Fort Phoenix where he would walk most nights.

Jim was a sixth generation Mason, active in the Masonic Lodge in Fairhaven. He climbed mountains, including Mt. Adams, Mt. Hood, Mt. Rainier, summiting many times. He had a thirst for knowledge and a photographic memory which allowed him to quote directly from books or magazines he had read years earlier. He was a kind and loving father, brother, husband, and friend, and will be missed sorely by those lucky enough to know him.

In addition to his wife Veronica, Jim is survived by his daughter Rebecka Rivers and her husband Todd of Portland, OR; his stepson Jonathan Green and his girlfriend Jenny He of Los Angeles, CA; his grandson Cliff Rivers; his brother Richard Booth and his wife Vicki of Tenino, WA; and many nieces and nephews. Jim was predeceased by his brother John Booth.

Relatives and friends are invited to attend his wake January 20th 5-8pm, with a Masonic service at 7pm in the Waring-Sullivan Home at Fairlawn, 180 Washington St., Fairhaven. His burial will be private. In lieu of flowers, memorial contributions in his honor may be made to National Parks Con­servation Association www.npca.org. For directions or to place an online tribute, please visit: www.waring-sullivan.com