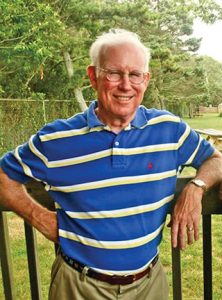 Jerry loved exploring the world with his family, playing ball and reading to the grandchildren, skiing, sailing and dogs. He loved food, especially pastries — witness the raspberry bear claw from the Shipyard Galley — seafood and coffee ice cream.

Jerry was an exceptional father. His devotion to his girls brought him to every dance and musical per­formance, sports game, track meet and graduation. But beyond that, he bestowed upon them and his grandchildren unconditional love always and demonstrated for them how to live a life of integrity, one filled with intellectual curiosity and a commitment to serving others. Jerry possessed a steadfast heart and his superpower was making people feel loved and cherished.

Jerry possessed the highest ethical standards and the strongest sense of integrity in work, as in life. He was a proud graduate of Brown University (1969) and Western New England College School of Law (1976).   Admitted to the RI Bar (1977) and MA Bar (1978), he opened the Law Offices of Gerald E Johnson in Swansea in 1978 where he practiced until 2018.  Jerry often said, “I love the law!”

In addition to his legal practice, Jerry was an adjunct professor at the University of Phoenix and Bristol Community College. Jerry served the Town of Mattapoisett, where he lived for 25 years, as a member and chairman of the Mattapoisett School Committee for 15 years. He was an active member of the Mattapoisett Land Trust.

Jerry was devoted to the democratic process. He used to tell us that he was always in a great mood on election day, saying “Today, I got the power!”

Jerry was predeceased by his parents James and Helen Johnson, brother Jim Johnson, and wife Ginny Johnson. He is survived by his wife, Cindy Johnson of Fairhaven; daughter, Anne Landry and her husband Ryan of Reading; daughter, Emily Johnson and her partner John Concado of New York City; and grandchildren, Michael and Charlie Landry. Jerry is also survived by dearly beloved brothers- and sisters-in-law, nieces, nephews, and grandnieces and grandnephews.

A service celebrating Jerry’s life was held on January 14, 2023 at the Mattapoisett Congregational Church.  Should you wish to honor Jerry’s memory, please consider con­tribut­ing to the Buzzards Bay Coalition or the Mattapoisett Land Trust.