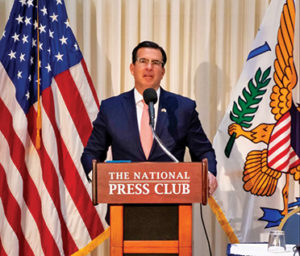 Eric Dawicki, president of Northeast Maritime Institute, speaks in Washington DC about a new effort to support the maritime industry developed by COPE: the Center for Ocean Policy and Economics, which was created by NMI. Submitted photo.

WASHINGTON, DC — A landmark Revitalization Plan for US Maritime Trade, Commerce and Strategic Competition to support and assist in ensuring maritime sovereignty and security, and revitalizing maritime commerce, was launched this month in Washington, DC.

Leading with remarks by Ambassador John D. Negroponte, the first U.S. Director of National Intelligence and former Deputy Secretary of State, followed by the Governor of the U.S. Virgin Islands, the Honorable Albert Bryan, Jr. and President Eric R. Dawicki of the Northeast Maritime Institute, the event also included a panel of subject matter experts on national security, regulatory enforcement, technology and trade, and mariner welfare.

Highlights of the Plan include the formation of the first U.S. open registry, and other maritime initiatives des­igned to make the United States more competitive, secure and propel it into a stronger leadership position as a maritime nation.

Signifying the importance of the Plan, Governor Bryan and President Dawicki participated in the signing of a historic agreement between the U.S. Virgin Islands and Northeast Mari­time Institute which features their collaboration on the development of the first open U.S. registry.

The significance of the U.S. Virgin Island’s partnership was made known in the retelling of its acquisition from Denmark by the United States in 1917 to help defend the Panama Canal from German U-boats in the region.

“We gather here today as an interested maritime community, as American citizens and as a collective body of people who care deeply about the maritime industry. We are guided by the creed ‘to honor the Mariner’ and to get back to an industry that has provided wealth and prosperity to our nation throughout the centuries,” stated President Dawicki in his opening remarks. “The revitalization plan for US maritime trade and commerce and strategic competition is ultimately about providing the United States with the tools to build, promote, and maintain a rules-based order on the high seas, and to reemerge as a competitive maritime nation. The plan recognizes that maritime commerce can lead the way towards economic success, peaceful and meaningful trade and commercial opportunities that are driven through strong and verifiable commitments towards environmental, social and governance standards. This project isn’t going to be easy, we will need to come together as one community, one nation, if you will, as common citizens, as mariners, as shippers, as investors and bankers, as trade partners, as manufacturers and retailers alike, and most importantly, through the full support and partici­pa­tion of a harmonized government establishment.”

Captain Anuj Chopra, Co-Founder of ESGPlus, who participated on the panel discussion, commented: “I think this is an opportunity and a day we’re going to remember for many years to come. We’ve had policies which were made decades ago, which served us well in the past as a nation. We now need to rewrite that policy so it will serve us in the 21st and 22nd century, whether it is welfare for seafarers, movement of cargo, security of delivery, or understanding ESG [Environment, Social & Governance] and how it applies to the maritime supply chain or maritime networks.”