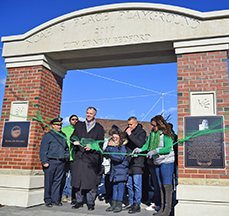 City of New Bedford officials, including Mayor Jon Mitchell, gather around for the ribbon cutting at Noah’s Place Playground on Monday, 11/20. The mayor holds the ribbon so Noah’s sister Isabella can cut it. Photo by Glenn C. Silva.

Noah’s Place Playground is open to the public. Located at Marine Park on Pope Island in New Bedford, right near the Fairhaven line on Route 6, the completely accessible playground is designed to allow all children, regardless of physical abilities, to play with each other.

Victor and Christine Fernandes spearheaded the effort in honor of their son Noah, who suffered from MELAS, a progressive and degenera­tive mitochondrial disease. 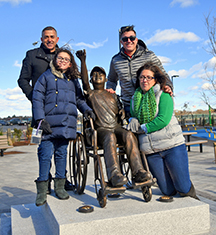 Members of Noah’s family pose with the statue of him at Noah’s Place Playground on Pope Island in New Bedford at the ribbon cutting on Monday, 11/20. Photo by Glenn C. Silva

The Team Noah Foundation raised funds for the playground, which broke ground in September.
On Monday, 11/20, officials joined with Noah’s family members for the official opening of the park. Noah’s sister, Isabella Fernandes, cut the ribbon.

The playground features path­ways wide enough for a wheelchair and other accommodations for children with disabilities.

The playground at Marine Park on Popes Island has been a longtime goal of the Team Noah Foundation and was made possible through their fundraising efforts and the generosity of numerous donors.

Only one year after his diagnosis, Noah began attending The Schwartz Center for Children, where he received physical, occupational, speech and aquatic therapies. The foundation aims to help fill in the gaps where insurances and govern­ment funds fail. The foundation works to ensure that no child is left without the proper equipment they need, be it audio/visual, wheelchairs, walkers, or more.

Noah, who lived in Acushnet, died last year at the age of 14.