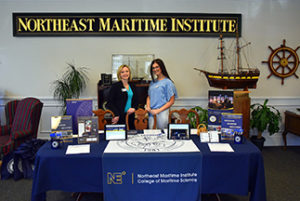 From L-R Meghan McCaffery and Molly Staples greet visitors at the Main building of Northeast Maritime Campus during an Open House on Saturdday, 3/31/18. Photo by Glenn C. Silva.

Northeast Maritime Institute held an open house for the public on 3/31/2018 from 1-4 p.m at their campus in Fairhaven. The school that opened in 1981 offers two-year associate degree programs as well as continuing education in the maritime fields in over 30 individual courses ranging from Basic & Advanced Firefighting, Celestial Navigation to Tankerman Barge, and other captain licenses.

Students in the associate program take a full academic course load that includes two summer internships, with more than 20 companies to choose from. Currently, 23 students are enrolled at the school in the two-year program. 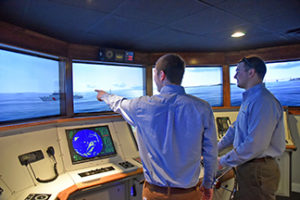 L-R Paul Chubbuck a first year student from Brockton, and Justin Ryan, in his last semester, operate the main simulator at Northeast Maritime Institute during an open house on 3/31/18. Photo by Glenn C Silva..

The school has much more to offer. Besides the two summer internships that give the students real world experience, there are two simulators located in the main building on Washington Street. Wall-to-wall screens simulate the view from the bridge, and a full working control helm with audio completes the experience. The resulting simulation feels just like being on a ship, even simulating movement.

Justin Ryan from Lakeville, in his final semester, was demoing the main simulator and piloting a 66-foot Coast Guard cutter in the San Francisco Bay. During his past internship, he was able to work with the Steamship Authority and gain some real sea experience. He seemed to be excited about his upcoming job working out on the West Coast running a barge from San Francisco and headed to Anchorage Alaska.

He said the school has given him the foundation and the knowledge that he will need to do his job.

“It’s going to be an experience, that’s for sure,” said Mr. Ryan.

In another building, Integrity Hall on Center Street, there are additional classrooms and a workshop where each class builds a 17½ foot Nor’ East Dory at the start of their second year. Students launch them in New Bedford Harbor, and it’s either sink or swim for the class as they are on board the very Dory they built.

The school auctioned off the first one and put the money towards a scholarship. They will be auctioning off another one at the Fairhaven Homecoming fair this summer.

Rey Peña, also in his last semester, proudly stood by the Dory he helped build as he told the story of how he came to an open house just like the one on Saturday a couple of years ago and became very interested in everything the school had to offer. Now, two years later, he will be graduating with a good education in a promising career ahead of him. 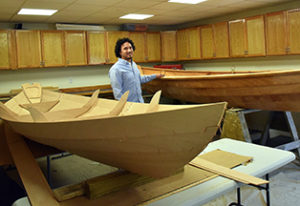 Rey Peña shows off a couple of the 17 1/2′ Nor’ East Dorries that are in progress at Northeast Maritime Institute during an open house on 3/31/18. Each class builds one from scratch as part of the curriculum. Once finished the boats are tested for seaworthiness with the class that built it inside on its maiden voyage. Photo by Glenn C. Silva.

In yet another building, Lemley Hall on Main Street, there were more classrooms, and a 48-person lifeboat out back in the parking lot.

Downstairs at Lemley Hall, Justin Runey the Firefighting and Basic Safety Instructor had all sorts of gear out for show and tell.

One of the life rafts inflates in about 30 seconds. Mr. Runey, a full time New Bedford Firefighter, came to the school on a grant to get his 100-ton license, and now teaches at the school part time.

“A lot of people don’t realize we are a growing campus,” said Mr. Runey.

When asked what was next for the school, Heather Corriea, the Chief Operations Officer, said the school was working on obtaining additional space but would not give away any details.

With a full-time staff of 20-25 people and a 16–1 student-teacher ratio, NMI offers  students an edu­ca­tion and a chance to learn a trade in a great environment. At any point there are approximately 50 students in session. •••