She swears she has no secret, it’s just the way it is. Maybe it’s just enjoying life a little at a time.

That’s about all the explanation Barbara O’Brien will give for why she has managed to hit the 98-year-old mark this month, still going strong, still independent, still reading books and staying current with the news.

“I’m amazed myself that I’ve lived this long,” said the small woman at her West Island home.

“In my heyday I had a martini,” she said.

Would that be one or two?

Her biggest cheerleader, and the one who ratted her out to the press about the birthday is Beverly Wilson, 90. The two have lived together for decades. 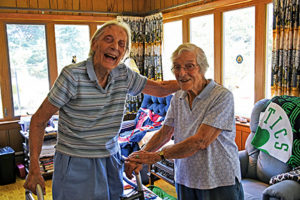 Beverly eggs on Barbara to tell about her time in the service in WWII as a nurse, her jobs as a nurse instructor, and every little thing that makes Barbara be Barbara.

Ms. O’Brien, though, insists she is just a simple person.

“I just enjoy life,” she said with a big smile, and you can tell from how she still moves with a spring in her step, that she must have been quite the spitfire in her “heyday.”

Part of that day-by-day involved clamming, boating, and fishing in the waters around the island when they were both a bit younger. They had a little Boston Whaler in the “old days,” that they used for lobstering, too.

“We enjoyed that tremendously,” said Ms. O’Brien. “Until someone stole stuff out of our pots.”

“When we retired, we lived,” said Ms. Wilson.

“We enjoyed the bounty of the ocean around us,” said Ms. O’Brien. “We really had a good time.”

Barbara O’Brien, 98, shares a moment, and a chair, with Beau. Photo by Beth David.

They also love the island for the people, the great neighbors who keep an eye out for them, and who they keep an eye on, too. Bev is well known for her seat at the window, waving to all the walkers, and banging on that window if she has something to say, often sparking some barking from their beloved poodle Beau.

Ms. O’Brien was in the US Navy for four years of active duty, and was active in the reserves for 17 years in a teaching position, retiring as a Lt. Cmdr. She graduated from St. Luke’s nursing school in 1942 as a Registered Nurse before she enlisted. She also worked at the Paul Dever school as a nursing supervisor.

Some people might remember her from her days volunteering at the New Bedford Glass Museum.

Now, the two of them do a lot of reading, and a lot of bird watching.

“You’re not going to find anything stimulating or fascinating,” she said, clearly oblivious to the fact that she herself is both of those things and more.