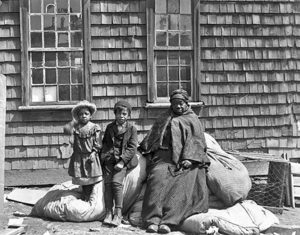 Marguret Mannizpdow [sic], referred to as Mrs. Mann, was the last occupant of the John Howland House at 119 South Water St., New Bedford. She is shown here with the last of her household effects on the day the building was demolished. 1905, reproduction from glass plate negative. Photo courtesy of the New Bedford Whaling Museum.

A new exhibition at the New Bedford Whaling Museum gives viewers an intimate look at turn of the century New Bedford — a city in the midst of momentous change.

Portraits of a City draws on images from the Museum’s Standard-Times Collection, a spectacular archive of photographs and glass plate negatives that captures many facets of the whaling industry, the city, and its history.

Portraits of a City is on view now through December 2019 in the Museum’s San Francisco Room and Harbor View Gallery.

For more information visit www.whalingmuseum.org or call 508-997-0046. The Whaling Museum is located at 18 Johnny Cake Hill in New Bedford, Massachusetts.

Curator of Social History Akeia Benard said, “The pictures invite you on a journey through the neighbor­hoods, vibrant ethnic enclaves, wharves, and establishments that marked New Bedford in the early 20th century. The exhibition provides a personal glimpse of individuals, legendary stories, and communities that made New Bedford what it is today.”

Turn of the century New Bedford was changing rapidly. The whaling industry was declining, the textile industry was now the city’s mainstay, and the city was expanding outward and building upward in the form of triple-decker homes to support an ever-increasing working class population.

Along with the changing land­scape, there were vast social and economic changes taking place and new waves of immigrants — not associated with whaling — coming into the city, establishing enclaves, and weaving their languages, cuisines, and cultures into the fabric of New Bedford.

The earliest of these negatives were used as part of the nascent halftone printing process, which newspapers used to bring photographs to an increasingly image-hungry readership. The collection came to the Whaling Museum through gifts from The Standard-Times newspaper, Everett S. Allen, and John D. Wilson.