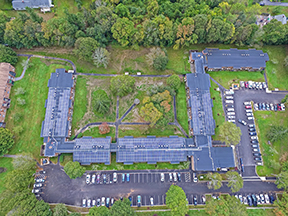 The Fairhaven Housing Authority partnered with Solect Energy and PowerOptions to install 630 solar panels on the rooftops of Oxford Terrace, an FHA property. The panels will produce 235,000 kilowatt hours per year, about 40% of what the facility will need. Photo courtesy of Solect.

The Fairhaven Housing Authority is determined to get off the grid, and a new solar array of 630 panels on Oxford Terrace will go a long way to making that a reality.

Partnering with Solect Energy, the a commercial-scale installer of solar energy systems, and PowerOptions, the region’s largest energy buying consortium, the FHA was able to install the system with no out-of-pocket costs. 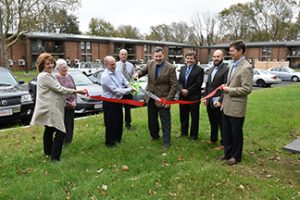 Town officials, FHA members, and representatives of Solect and PowerOptions gathered together in front of the building on Monday, 11/6, for a ceremonial ribbon cutting.
FHA Chairperson Jay Simmons wielded the oversized scissors with Liam Sullivan of PowerOptions.

The 236 kilowatt system consists of 630 photovoltaic panels which are projected to produce 235,000 kilowatt hours of energy annually. That should provide about 40% of the need at Oxford Terrace. Projected first-year savings are estimated at $15,700, with $467,000 in estimated savings over the life of the 20-year agreement.

Oxford Terrace, which has 108 units for seniors and disabled people, heats with electricity, so the savings are significant.

The FHA also has an arrangement with a solar farm in Mattapoisett, buying renewable energy credits from them and using the net metering system to credit the FHA. It means that the FHA is, in effect, getting almost all of its electricity from solar.

The FHA has 284 units of affordable housing in Fairhaven, including Oxford Terrace with 107 units, Dana Court with 55 units, Green Meadow (aka McGann Terrace), with 92 units, Anthony Haven with 24 units, and six units of family housing.

Under the program, Solect installs, owns, and operates the solar array on the FHA’s roof. Solect then sells the power generated at a fixed rate to the FHA for a period of 20 years under a Power Purchase Agreement (PPA) negotiated by PowerOptions.

The array on Oxford is a “behind the meter” system, meaning that the electricity from the panels directly powers the building. 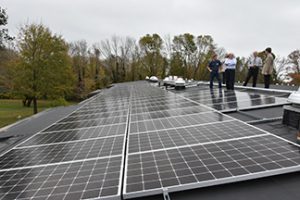 Members of the Fairhaven Housing Authority and representatives from Solect Energy and PowerOptions check out the solar array on the roof of the Oxford Terrace on Monday, 11/6, after a ribbon cutting to commemorate the array. Photo by Beth David.

In some installations, the power goes to the grid first, but not here. At Oxford, the electricity is created by the panels and goes to nearby inverters, which change it from a DC (direct current) to AC (alternating current). The AC conduits take the electricity to the electrical room in the facility, where it is tapped into and used by the units.

The power also runs through the meter for measuring. When the system produces more energy than is needed at any given time, the meter runs backwards and creates electricity credits that the FHA can draw on when needed. When the array is not producing enough power for the facility, the meter will switch directions, and actually go back­wards. The accumulated credits will be used up first, then the FHA will buy its electricity from the Matta­poisett solar farm through the net metering system.

“It’s saving us major money already,” said Ms. Sheedy, adding that the FHA was reducing its carbon footprint and is being conscientious, and contributing to the community for future generations. 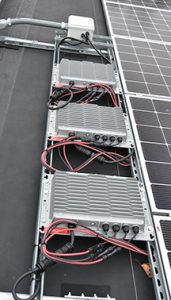 Direct current power from the solar panels is sent to these inverters that convert the energy to alternating current (AC), which is the kind of power used in homes. Beth David photo. 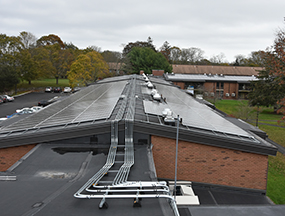 These conduits take the converted energy (AC) and send it over the side of the building to the electrical room (BELOW), where it is then tapped into by the individual apartments at Oxford Terrace. The 107-unit Fairhaven Housing Authority complex will get up to 40% of its electricity from the newly installed solar panels. Photos by Beth David.

The array will offset yearly carbon dioxide (CO2) emissions equal to 19,679 gallons of gasoline or 191,347 pounds of coal burned.

The FHA is doing all it can to get off the grid, Ms. Sheedy said, “And it’s all driven by the board.”

“Jean (Rousseau) has been trying to get us off the grid for years now,” said Ms. Sheedy.
The FHA installation posed an added challenge. The complex’s cement roof and the area’s 140-mph wind zone required an alternative solution from a standard roof-mounted PVC system. Solect elected to install the Mouli Engineering SolarPod Crown racking, because of its no-roof-holes design, high wind capability and simplicity. Not having to penetrate the cement roof saved substantially on the amount of labor, time and ultimately cost required for the project.

“It was very challenging,” he said.

The system uses weights, and connects the whole array together, and lays out the system on both sides of the roof. It is designed to withstand wind speeds of 140 miles per hour.
It was tested, albeit not to that degree, in the last storm that had winds gusts over 70 mph.
Ms. Sheedy said they were not 100% off the grid, but, “We’re working on it.”