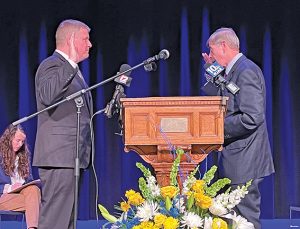 In his remarks at his swearing in on January 3 at Durfee High School in Fall River, Sheriff Heroux thanked Mr. Hodgson for a smooth transition.

“This was a movement, a move­ment for change,” said Mr. Heroux.

He asked voters to be patient while he makes the changes that they want. He said he has heard people’s concerns and will address them.

“I take things seriously, but I do not overreact,” said Mr. Heroux. “I am going to act on things that can be proven. I am going to be fair.”

Sheriff Heroux addressed the staff saying there woiuld be changes, but some things would stay the same. He outlined some changes to the organizational structure of the system. Those changes include adding a Director of Inmate Services, a position reporting directly to him.

“Consider that inmates are often paroled based in part on their participation in treatment programs intended to reduce recidivism. If our programs don’t work, someone not ready for release may go out and do something no one wants,” said Sheriff Heoux. “It is critically important that we know if what we are doing is effective or not.”

He said he heard some services are being offered and some are not, so he will not know until he gets a “an up-close look.”

He promised to get inmates set up with housing, healthcare and jobs.

“These are the pillars of successful prisoner reentry,” he said. “But one thing for sure is that services offered under me are going to be made public to a degree we have not seen before.”

He also said he would bring in outside help to reduce the rate of suicide in the jails.

Mr. Heroux also said he would recruit homeless veterans to work at the BCSO; and he is planning to give tours of the jails.

He will do the job, he said, knowing that someday he will no longer be sheriff, and whoever succeeds him will build on what he has done. He said he would not be sheriff for life, maybe one or two terms.

“At the core of what we do in corrections is God’s work. It’s about working with people who might not have ever had that first chance in life, who many in society have disdain for. It’s about giving hope to the families of the incarcerated. It’s about giving a sense of purpose to the people who work in corrections. It’s about giving pride to the people who live in our community that we are doing something that, although they may not see, is a benefit to them and their loved ones,” he said. “The election is over. I may have been one side’s candidate, but now I am everyone’s sheriff. Whether you supported me or not, I hope you like the work that is done and the results that are delivered.”