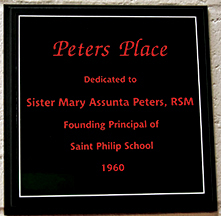 This plaque hangs in the room dedicated to Sr. Mary Assunta Peters, RSM, at St. Philip School in Greenville, RI, where she was the founding principal in 1960. The room was dedicated at a ceremony on 9/13/18. Photo by Beth David.

In New Bedford, back in the 1920s and 30s, she was Rose Peters, or “Rashida” to her parents. In Rhode Island, a decade or two later, she was Sr. Mary Assunta, Religious Sister of Mercy, until she was allowed to reclaim her name and become Sr. Rose Peters, RSM. To her 10 sisters, she was always simply “Rosie,” and to her many nieces and nephews, she was always “Aunt Rose.”

And last week, back in Rhode Island, where hundreds of her students loved and feared her, she was remembered as an energetic educator, a “Five-Foot Dynamo,” who was the founding principal of St. Philip School (grades 1–8) in Green­ville, RI, in 1960.

Two rooms on the parish campus were also renamed and dedicated on Thursday: “Mercy Hall” in the former convent, and “Peters Place,” in the school. Both will be used as meeting rooms. Peters Place will also be available for students to work in.

About 150 people attended the ceremony, which also included remarks by the current principal, Cynthia Senenko, a scripture reading by Middle School student Emily Belvin, and music by the St. Philip School Chorus. Middle school student ambassadors then escorted many honored guests, including nuns, priests, retired staff and their families, through the school to see the rooms. 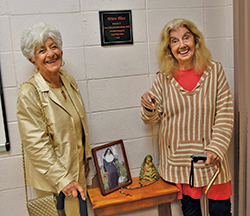 Maryann (Peters) Chomak and Octavia (Peters) David, visit “Peters Place” in St. Philip School in Greenville, RI, a room named after their sister, Sister Mary Assunta, Religious Sister of Mercy, who was the founding principal of the school in 1960. A dedication ceremony was held on 9/13/18. Photo by Beth David.

Among those singled out and honored, were Maryann (Peters) Chomak and Octavia (Peters) David, who are Sr. Mary Assunta’s sisters.

The event kicked off the annual St. Philip’s Festival held all weekend.

After the ceremony, former students and staff lingered to take pictures in front of the angel statue.

A few were eager to talk about their time at the school and its first principal.

Fr. Francis Kayatta, who was pointed out as the only student who went on to become a priest, had Sr. Mary Assunta in the fourth grade. There were 50+ students in each class. Not only did she teach fourth grade, she was principal and superior of the convent, all at the same time.

Fr. Kayatta said he was not afraid of her, exactly. 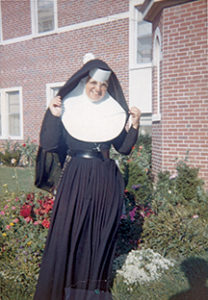 “She ruled with an iron rod,” he admitted. “But you were not afraid because you knew what the rules were.”

He said in later years he became close to his former principal, later known as Sr. Rose, and he asked her how she did it.

“I told her she was multi-tasking before it was ever a word,” he said. “She was so dismissive, and said she just had to do it. She said, ‘it was easy to do because the parents were behind us.’”

Sr. Mary Assunta’s relatives were especially happy to see her remembered in such a durable way. The oldest of 11 girls, she was always interested in each of her many nieces and nephews, and especially their educational goals. Several of them noted that she helped them with their higher education.

“Without Aunt Rose, I would have never been able to attend Salve Regina,” said Beatrice (Abraham). “As a Mother Superior, she recommended me for a full tuition scholarship. I miss her.”

Several other nieces also attended Salve Regina and credit “Aunt Rose” with helping them get there.

In the program book for the event, a story about the founding of Saint Philip School by Mrs. Virginia Friedrichs Yanyar (formerly Sister Mary Ellen Francis, R.S.M.) refers to Sr. Mary Assunta as a “five-foot dynamo.” 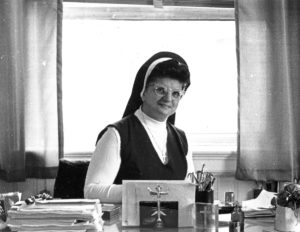 By 1964, the school had reached its full capacity: Eight grades, eight nuns, and a minium of 50 students in each grade, she wrote.

“The school was not only known for academic excellence but from the beginning was also an integral part of the life of the parish,” wrote Mrs. Yanyar. “In large measure because Sister Assunta reached out and welcomed all parents and families to be part of this larger faith community.”

“Many a night, the light in Sister’s school office would be on while she was guiding, advising, and helping [whoever] came for direction or counsel in their personal lives,” wrote Mrs. Yanyar. “This atmosphere filtered down to the students themselves who often helped out in the convent — washing windows, polishing floors, shopping at the market, or just playing sports in the fields behind the convent building.

“Much could be said about the early history of this school, memories too numerous to recount. But in 58 years, it would seem that the same spirit still lives and that would make Sister Mary Assunta and all who have taught here, very happy!”

The program book included a photo of Sr. Mary Assunta in the full habit of the 1960s, which was chosen from several photos sent by the family and spanning decades of her life.

Martha Ventor, who guided the relatives on the school tour, said it was chosen above the other photos be­cause it so clearly showed her energy and enthusiasm, the things her stu­dents remem­bered most about her. 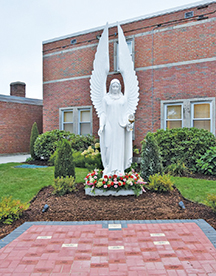 The 12-foot Angel of Peace statue at St. Philip School in Greenville, RI, presides over the Mercy Memorial Garden, which has 34 red-colored memorial bricks for the Sisters of Mercy who taught at the school, and five ivory-colored bricks for the sisters who served as principals. Photo by Beth David.