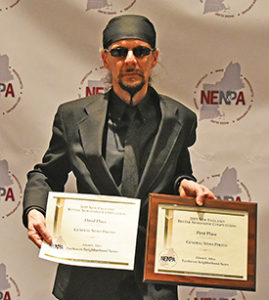 Fairhaven Neighborhood News photographer Glenn S. Silva holds the two awards he won at the New England Better Newspaper Competition for journalism sponsored by the New England Newspaper and Press Association and presented at the annual banquet on 2/8/20 at the Renaissance Boston Waterfront Hotel. Photo by Beth David.

It is the second time in three years that Mr. Silva has won in the general news category for weeklies with circulation less than 6,000. In 2018, he won for his photo of Michelle Carter the day the verdict was announced.

This year, Mr. Silva took a first place and a third place.

He won third place for his photo of Senator Elizabeth Warren at the window looking at the crowd right before she went out to announce her run for President of the United States in Lawrence, Mass. on 2/9/19. The photo ran ran in our 2/14/19 issue.

Congratulations to Glenn and to the Neighb News for showing that we can compete with our peers in a professional setting. 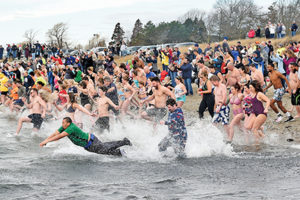 At least 120 people jumped into the water at Fort Phoenix in Fairhaven on 1/1/19 for the annual Polar Plunge. Hundreds more lined the shore to watch the show. Photo by Glenn C. Silva.

For the Polar Plunge photo, Mr. Silva got up a bit early on New Year’s day, braved the cold, and ventured out onto the jetty to get the shot.

He got his media credentials and stood around in 21 degree weather until the announcement. He took the winning photo at 11:44 a.m.

His extra effort and dedication to always arriving extra early, and paying attention, give him the edge when he is shooting special events.

He was one of only a handful of photographers who ventured up the elevator to where Sen. Warren was waiting with her family, getting ready to go on stage. 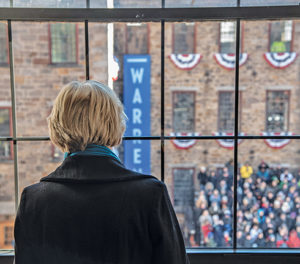 US Senator Elizabeth Warren (D-Mass.) takes a moment to look at the crowd gathered to hear her officially announce that she is running for president of the United States on Saturday, 2/9/19, at the Everett Mill in Lawrence, site of the famous bread and roses strike. Photo by Glenn C. Silva.

So, here’s to another year of award-winning news gathering by our little crew.