The transportation and infra­structure bond bill signed by Governor Baker earlier this month includes $100 million for the permit­ting and construction of the New Bedford-Fairhaven bridge.

State Rep. Bill Straus and state transportation officials presented information to Fairhaven officials on August 10. Rep. Straus also spoke about the presentation at the Select Board meeting on 8/15.

The bill authorizes the spending, Rep. Straus said, and allows the state to borrow the money.

Engineers and state officials are looking at several possibilities for replacing the current swing bridge, including a different design swing bridge; two different types of drawbridges, properly called a “bascule” or a lifting bridge; and a vertical lift, which actually lifts the whole road, like the railroad bridge on the Cape. Each type of bridge has its pros and cons.

MassDOT Highway Administrator Jonathan Gulliver said some of the considerations 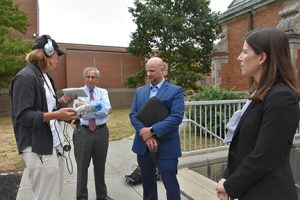 include the impact different bridge types will have on local businesses on the road leading up to the bridge; how long it will take for each bridge type to open and close, which interrupts road traffic; and how each type of bridge will help or hinder marine traffic to the new north terminal being built for wind turbine production.

Because it is a navigation channel, the US Coast Guard is also a major player in any design and construction plans.

After state officials feel they have a good idea on what design they want to use, they will set up public meet­ings to get input from people who use the road and those who use the channel.

One thing that is not contested, is the need for the bridge to be replaced.

Built in 1899 and completed in 1903, the current bridge has been rehabilitated several times. Twelve different studies have been done that include the bridge, including seven replacement studies going back to 1966, and other studies that included the road or harbor.

The bridge has cracks in the concrete, impact damage to railings, corrosion, missing bolts, and (as we all know) machinery and operating Systems in poor condition requiring continued maintenance and replace­ment of critical parts, according to the presentation.

Making the bridge too high, though, would isolate the properties underneath it, such as the businesses in the commercial plaza that abuts the bridge.

Some of the inconveniences of the project include a full road closure and detour during portions of the project, and short-term closures to navigation that will have to be coordinated with the Coast Guard.

Replacing the bridge has been discussed since at least 1966, but this is the first time that significant funds have been earmarked for the project.

The first time he got stuck behind the bridge, it was “quaint,” said Rep. Straus.

“By the second time, the quaint­ness had worn off,” he said.