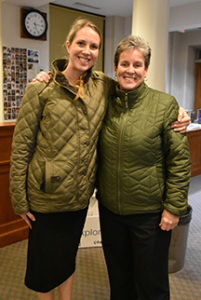 L-R: Lauren Millette and MJ Muello pose for a picture for the local free sheet at a recent event at the Fairhaven High School Library. L-R: Ms. Millette is the new Vice Principal at FHS, taking over for Ms. Muello, who retired last week. Neighb News file photo by Beth David.

Known throughout the school as the person to go to with a problem, Ms. Muello’s philosophy can be summed up pretty easily: “They’re all good kids,” she said.

Former Principal Tara Quirk Kohler, who is now Assistant Superin­tendent, worked with Ms. Muello for nine years and helped create a culture of acceptance for all students, said Ms. Kohler.

When they first met, they both were wearing a starfish pin, as a reminder of the story of the little boy who walks along a beach that is littered with starfish that got tossed up in a storm. He starts throwing them back one by one. A man tells him that it can’t possibly make a difference with so many thousands that need to be saved.

The little boy picks up a starfish, throws it into the water, and says: “It made a difference for that one.”

“So, we both connected immedi­ately,” said Ms. Kohler. “Her heart was in it for every single kid.”

She said Ms. Muello worked tire­lessly to make sure each student felt safe and got a good education.

“She was not afraid of the tough conversations with kids or families,” said Ms. Kohler.
The focus was always on the students’ needs, she said, and it was not something that had to be manufactured.

“It just pours out of her,” said Ms. Kohler, who also said she believed a lot of students only graduated because of Ms. Muello’s support and belief in them

And, indeed, on gradua­tion day, it was common to see students seeking her out to take pictures and hug her.

“You don’t come across people with that kind of heart and soul for the kids very often,” said Ms. Kohler.

Ms. Muello said she had mixed feelings about retiring, but it was time to go. She also said she had great faith in the new VP, Lauren Millette.

“She has a lot of great ideas,” said Ms. Muello, indicating it was time for the youngsters to take over.