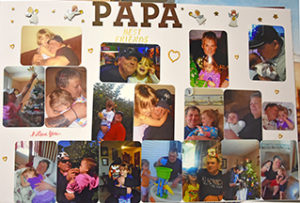 This collection of photos focuses on the special bond Mike Roberts had with his four-year-old granddaughter Aaliyah. Photo by Beth David.

Big. That’s the word that kept popping up. Everything about Mike Roberts was big. He was a big guy. He had a big heart. He was a big teddy bear.

Mr. Roberts, 49, was killed when the boat he was on, the fishing vessel Misty Blue, went down 10 miles southeast of Nantucket on December 4, 2017. His body was recovered on December 18.

His heartbroken wife Tammy, their little granddaughter Aaliyah, friends and family gathered for a memorial service on Saturday, 12/30/17, at the Seamen’s Bethel in New Bedford. The little chapel filled up, despite the frigid temperatures and the falling snow.

“Big Mike,” said the Rev. Kenneth MacMillen as he asked to hear stories about the man who was clearly passionate about the things he loved.

“The man could cook,” said a voice.

“I’m gonna miss him,” said another.

“He was my light. He showed me that not every guy was bad,” said his stepdaughter Kalie Brum.

The Rev. Mr. MacMillen told the crowd to look to the scriptures for strength in hard times, especially John 14:1–6, Let not your heart be troubled…Believe in Me.

And Psalm 23: The Lord is My Shepherd…

Stacey Carreau read a letter from Tammy thanking everyone for their support, and saying the whole ordeal seemed “surreal.”

“You were a good man with a very big heart. You were my Archie Bunker, but also my Teddy Bear,” reads the letter.

Tammy and Mike met in a record store when she was 16 and they soon were inseparable, she said, sharing a love of music. Then they were on and off for a few years, she wrote.

“But somehow we always found our way back to each other. Time separated us for awhile. We lost touch. Fate had it out for us and we found each other again.”

She said the “very best times” of her life were spent with him, and the most challenging, too.

“Thank you for treating my kids like a dad and calling them yours. I want to thank you from the bottom of my heart for being the best papa a little girl could ever have,” she wrote about their grand­daughter Aaliyah. “You showed her true and unconditional love.”
She promised to keep his memory alive for Aaliyah

They had their struggles, she said, but never gave up on each other.
“I have no idea how to go on without you. I pray you never leave my side. Watch over us,” she said, adding it is not goodbye, but “until we meet again.”
“Meet me at the gates. Until we meet again, you will live in my heart. I love you. Love forever and always, your Baby Doll.”

Many in the crowd wept openly as the letter was read. 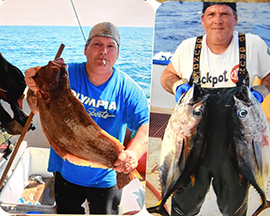 Mike Roberts shows off a few of his big catches. Mike Roberts was killed when the clamming boat he was on, the Misty Blue, sank 10 miles southeast of Nantucket on December 4, 2017.

After the service, family and friends met at St. Joseph Church in Fairhaven for food and refreshments.

“He always accepted me,” said Tammy’s daughter Kalie Brum, 22. “I always appreciated it. It truly means a lot. He was the light after the dark for me.”

Bob Roberts, who said he adopted Mike when he was an adult, traveled up from Alabama for the ceremony.

When Mike had cancer in 1997 and needed a place to recover, he turned to his mother, who died this summer, and Bob.

“He had a heart of gold,” said Mr. Roberts. “If he loved you, he loved you with his whole heart. And when he hugged you, he never left any doubt that you were hugged.”

He said Mike had no trouble showing his feelings and emotions.

“He wasn’t just a tough fisherman,” said Mr. Roberts. “He had a very good soul. He took to my kids like they were his sister and brothers.”

Mike’s stepson Ryan Pereira said that Mike had a “special bond” with Ryan’s daughter Aaliyah.
“That’s what hurts,” said Mr. Pereira. “She misses him. They spent a lot of time together.”

And Mike was there for his mother, he said, something he appreciated. He said he understood why Mike had such fun with Aaliyah.

“He was a kid,” said Mr. Pereira. “He was very playful. Like a little kid. And he took care of my mother.”

“He was a helluva hard worker,” said Mike’s stepson Kevin Brum, who fished with Mike on the Misty Blue a few times. “He was a bull. He was a very fun guy, down to earth.”

He said Mike helped everybody and never had a problem with anyone. He also noted that Mike was a great cook. He was a five-star chef before he started fishing.

Mr. Brum works on an offshore lobster boat, but said he has no second thoughs about going out.

Mr. Brum’s friends also had a few good things to say about Mike.

“He was always in a good mood,” said Sean Reynolds.

“He was accepting like anything,” said Trinity Lyford. “He made me feel like family the first time I met him.”

“He was always giving,” said Tammy of her husband. “He was a good guy. He loves his grand­daughter. He had a big heart, a very big heart.”

“He was a big teddy bear,” said Sandy, a family friend.

“But he was a damned Yankees fan,” laughed Tammy, saying they had a little rivalry in the house about it.

He loved the Cowboys, and they watched NASCAR races together. He also loved his rock n roll music.

A family friend created a GoFundMe page for Mike’s family at: https://www.gofundme.com/4tffqo8