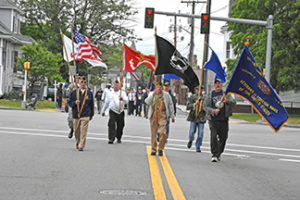 In addition to the US Flag, veterans carry the flags of the US Army, US Marines, US Navy, US Air Force, the POW/MIA flag, and the VFW flag at the Fairhaven Memorial Day Parade on 5/27/18. The missing banches are the Coast Guard and the National Guard. Photo by Beth David.

Fairhaven held its 150th Memorial Day service on Monday, 5/27, honoring veterans, and especially those who lost their lives fighting in the nation’s wars. Activities started with a parade  along Main Street, from Center Street to Riverside Cemetery, where a ceremony was held.

The parade stopped at the high school for the raising of the “big flag” while the Fairhaven High School band played the national anthem. The 30×50-foot flag is an impressive sight in front of the 1906 Elizabethan-style building. 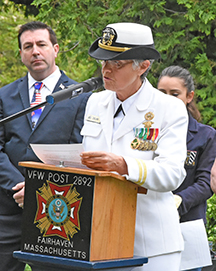 At Riverside, the ceremony included a reading of the names of veterans who have died in the past year, the reading of General Logan’s Order, which created Memorial Day; Lincoln’s Gettysburg Address recited by Fairhaven High School Senior Class President Eliana DaCunha; the laying of the wreaths at the Revolu­tionary War memorial; opening and closing prayers; musket fire and firing of the small cannon by the Fairhaven Village Militia; musical selections by the Fairhaven High School marching band and the First Congregational Community Chorus; taps; and the keynote address by Gayla M.D. Reilly (Lt. USN ret.)

Emcee George Brownell, a Vietnam War veteran, Staff Sgt., US Army, told the crowd to remember that there are people standing on the front lines 365 days a year, “protecting our freedom. God bless them.”

Lt. Cmdr. Reilly made it a point to thank the crowd for attending and remembering the men and women who have given their lives “in service to this great nation.”

She said people throughout the country were gathering to remember and give gratitude.

“Our gathering is just one small spark in the flame of pride that burns across the nation today,” she said. “It is a way we can honor those who have made the ultimate sacrifice so that we may live in freedom.”

She noted that this is the 105th year that the country has held Memorial Day celebrations. 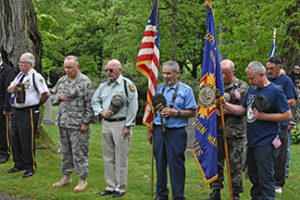 Veterans uncover their heads for the opening prayer during the Memorial Day services in Fairhaven at Riverside Cemetery on Monday, 5/27/18. Photo by Beth David.

“I want you all to know that the graves of the Fairhaven veterans that made the ultimate sacrifice to our nation are honore appropriately, and you are about to hear their names,” she said. “Our presence here today is a tribute to those lost troops and to their families. It is a way to say that we remember. God bless you, your families, and most of all, God bless America.” 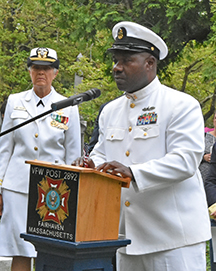 Larry Jones, Sr. Chief, US Navy, reads the names of veterans who have died in the past year on Memorial Day, 5/27/18, at Riverside Cemetery in Fairhaven. Photo by Beth David

Mr. Brownell closed the ceremony with a thank-you to all who attended, and especially the parade committee,  “who worked so, so hard.”

He also thanked the first responders, saying, “My heart goes out to you. I really don’t know how you do it in today’s climate.”

Mr. Brownell also reminded everyone of how the nation began so many generations ago.

“When England came to take this country back from us, farmers, doctors, lawyers, fishermen, stood up and fought off the greatest army of the world for their freedom,” said mr. Brownell. “We need to remember that because that’s what this country is all about.”

For a video of the parade and the Riverside Cemetery ceremony, visit https://plus.google.com/+GlennSilva.