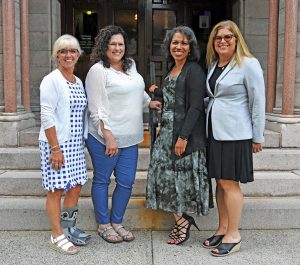 It’s the energy in the room that’s different, that seems to come from a camaraderie that is years in the making for some, and brand new for others. An energetic conversation springs up spontaneously, with everyone having something to add, but an underlying respectfulness that somehow results in no one getting cut off every time she tries to speak.

These are Fairhaven town govern­ment’s Power Women, with Angeline “Angie” Lopes Ellison in the town’s top spot as Town Administrator, and Tara Quirk Kohler in the school department’s top spot as Superin­tendent spot, which are both appointed positions; and the two elected chairpersons of two of the town’s top boards, Stasia Powers on the Select Board, and Pam Kuechler on the School Committee (Board of Public Works, you’re next).

Ms. Ellison is only the second Town Administrator Fairhaven has had, and the first woman in that position. And although the others are not “firsts” for their positions, this is the first time that all four positions are held by women.

For Ms. Kohler, her first “first” for the town was when she was hired as the principal of Fairhaven High School. During her tour of the school, a student asked if she was the first female principal, so walked down to where the portraits of all the former principals hung on the walls. And, sure enough, there were no women there.

“I saw the little girl’s shoulders literally go back,” said Ms. Kohler. “It meant nothing to me, but it did to her.”

She also said that an office worker used to make coffee for the former boss, a male, but when Ms. Kohler started, she literally heard her say, “I’m not making her coffee.”

“I don’t need anyone to make me coffee,” said Ms. Kohler. “But the flip of the switch in what a person is willing to do in their job was really eye opening.” 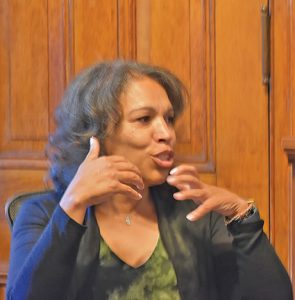 Fairhaven Town Administrator Angeline “Angie” Lopes Ellison makes a point during an interview on 7/6/22. Photo by Gretchen Kohler for the Fairhaven Neighborhood News.

Ms. Ellison has a double whammy, being of Cape Verdean descent, and  therefore often the darkest-skinned person in the room, and a woman. She said she was accustomed to her skin color being a factor, but in Fairhaven, she found she was also often the only woman in the room. She can see the expressions of people trying not to let their surprise show when they realize she is the Town Administrator.

They all said their decisions, large and small, face more scrutiny.

“If a man says it, it’s ‘yup, okay.’ You say it and you have to justify and explain it,” said Ms. Ellison, with all the other women nodding and agreeing. “I’m smart. I’m intelligent. I’m educated. So do not mansplain me.”

She admits she might perpetuate the role a bit, when she explains where she is going every time she leaves the building. She is, after all, the boss. Men just leave and say they have a meeting or something. She explains every step of her planned time away from her desk.

“We have to justify what we are doing,” said Ms. Kohler.

Ms. Powers already has more than one story about men passing by her to shake the hands of the other select board members, not expecting her to be a board member, let alone the chair person.

And indeed, the handshake does seem to be the indicator, the outward manifestation of the subconscious mind of those who simply do not expect to see a woman in certain positions. All four women have stories of being literally passed right by as men are greeting the group, presumably looking for the person in charge. 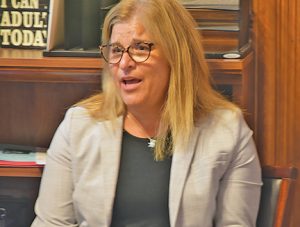 Fairhaven Select Board Chairperson Stasia Powers makes a point during an interview on 7/6/22. Photo by Gretchen Kohler for the Fairhaven Neighborhood News.

“So now, I make it a point to stick out my hand so there’s no chance they look and think I didn’t,” said Ms. Powers.

“It’s breaking stereotypes,” said Ms. Kuechler. “You have to have confidence that as a person you bring to the table skills. As an elected person, I had to tell people that when I was campaigning. Be confident.”

Ms. Powers was the only woman on the School Committee when she first got elected.

“We’re hope,” she said. “Change is happening. It shows the community has accepted new leadership.”

In a time when many see their rights being chipped away, she looks around and sees she is no longer the only woman in the room.

“We, all four of us, are aware we set an example for the young women of this community,” said Ms. Powers in additional written comments. “We are showing them that we are making headway, but we should all recognize change is never easy and not always as fast as we want it to be.”

When more women in leadership is the norm, that opens the door for more women, 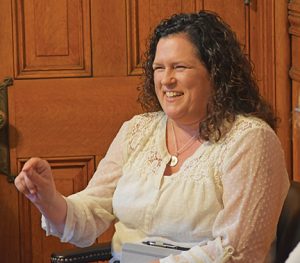 Fairhaven Superintendent of Schools Tara Kohler laughs as she makes her point during an interview on 7/6/22. Photo by Gretchen Kohler for the Fairhaven Neighborhood News.

“Just the fact that this is news­worthy,” said Ms. Kohler.

They agree they bring a different tone to their positions, more collegial, allowing for more discussion,

“I knew the way I was setting expectations was going to move the department in a positive direction and set an example of how we treat each other,” said Ms. Kuechler. “That was the driving force for me to do this in the first place.”

They disagree, she said, but respectfully, and allow people to have their voice.

“It’s a different approach, and different life experiences,” said Ms. Powers, noting the select board is more diverse than ever. “You have to treat everybody with respect. You have to take the ego out of it.”

“These are things I’ve learned over time,” said Ms. Kuechler.

Ms. Ellison and Ms. Kohler have different roles. They can hire and fire people, discipline employees, and manage hundreds of employees and budgets of tens of millions of dollars.

Ms. Kohler laughed and said those roles came naturally to her. She got a “pretty tough skin early on,” she said because her father was a nurse, not a doctor, so she got ribbed a bit.

Her mother learned to take care of herself. She, too, was a nurse.

“So being raised by a woman who was strong, and a woman who didn’t take any BS,” helped, she said. “So I never saw gender as a thing.”

When she was in college, she was a call firefighter in Dartmouth, and there were very few women.

“I was young and didn’t think of gender at all. So I got there and it was a man’s world,” said Ms. Kohler.

Ms. Powers was a lifeguard at Horseneck Beach and the guys would all joke…save me, save me.

“It’s evolution,” she said. “Some are more along than others.”

Ms. Kohler has only brothers, and all her cousins were male, too.

“So, literally, I never knew any different,” she said.

Ms. Powers said when she was on the school committee many people, including some staff members, would not look her in the eye.

“Being the chair now has taken that away,” she said. 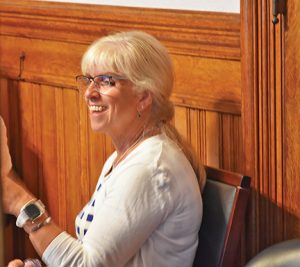 Fairhaven School Committee Chair Pam Kuechler makes a point during an interview on 7/6/22. Photo by Gretchen Kohler for the Fairhaven Neighborhood News.

Ms. Kuechler said there was lot of discussion about what to call her when she became chairperson of the School Committee. She decided it should just be “chair.”

Ms. Ellison said she, too, had no trouble taking on the role of boss.

At first she began to explain, then laughed.

“I’ve always been bossy,” she said.

She said her family taught her to work hard to get what you need.

“And my mother never said you can’t because you are a woman,” said Ms. Ellison.

She said she was very upset when she learned in civics class that she could not be president because she was not born in the U.S.

It never occurred to her that she couldn’t be president because she is a person of color or a woman.

Ms. Kohler said she was very upset when she could not be an altar server because she was not male. The priest told her that God did not mean for her to be an altar boy.

“I’m sure God didn’t mean for there to be computers,” she retorted.”

Ms. Kuechler got “really mad” when she realized that so many job titles specified gender just by nature of the suffix.

Any advice for other women?

Oh, plenty of that.

“I will struggle, I will fight, so when the next female is here, it will be easier,” said Ms. Ellison

Ms. Powers noted how happy she is when she sees young women go before the board to get involved in town government.

“It’s inspiring that you could be the on ramp for some of those kids,” said Ms. Kohler.

“You’ll make mistakes,” said Ms. Ellison. “But you learn from them and self correct.”

“Don’t be who you think they need you to be,” said Ms. Kohler.

“You can be nice and be strong,” added Ms. Kuechler.

She said her daughter was always pestered to smile more and she would tell people to leave her alone.

“Why do I have to smile,” she added. “A lot of women get that. You see pictures of men with no smile and it’s okay. If women are not smiling, it’s not okay.”

Do what you are doing for a good reason and with kindness, said Ms. Kohler. “It will get you along way in life.”

“We’re not here to cut others down,” said Ms. Powers, and said they “huddled together” at town meeting and faced criticism for it.

“We were lifting each other up,” said Ms. Powers.

“Our little huddle that was such an issue,” said Ms. Ellison. “But men getting together at the golf course or at a house making decisions, is not.”