Fairhaven hosted the 17th Manjiro Festival on Saturday, 10/5/19, in the center of town. The event is held every alternating between Fairhaven and sister city Tosashimizu, Japan.

The festival is held in commemora­tion of Manjiro Nakahama, the first known Japanese person to live in the United States and be educated here. He was rescued from a desert island  in 1841 by Captain William H. Whitfield of Fairhaven of the whaler, John Howland.

While Manjiro’s companions went to Hawaii, the 14-year-old Manjiro returned to Fairhaven and lived with the Captain. Manjiro learned English, advanced navigation, and eventually became instrumental in opening up Japan to the west.

For the past 178 years, the Whitfield and Nakahama families have maintained a friendship that extends to the communities of Fairhaven/New Bedford and Tosashimizu which have a formal sister-city relationship.

The festival welcomes a contingent from Japan, and on alternating years, Tosashimizu welcomes a group from the U.S.

“If Captain Whit­field and Manjiro could look down on the gathering of so many citizens from both countries, they would, indeed, be happy and proud that their change meeting at Torishima Island on June 27, 1841 resulted in such a close bond between our two communities,” wrote Gerald P. Rooney, President and CEO of the Whitfield-Manjiro Friend­ship Society, in the program book. “In that spirit, please enjoy the day and meet as many new friends as possible.”

At the festival, which was free to attend and was held on the streets around town hall, included taiko drumming, classical flute, a Japanes tea ceremony, martials arts demon­stra­tions, a variety of live music, and dancing in the street. Street vendors sold food, including Japanese noodles, crafts, jewelry, photography, and other hand made items.

Festival goers could have their names written in Japanese, and students from Bridgewater State University’s Asian Studies program made origami cranes to give away.

The WMFS operates a museum in the house lived in by Capt. Whitfield and Manjiro, at 11 Cherry Street, Fairhaven. To learn more about Manjiro and Captain Whitfield, visit www.Whitfield-Manjiro.org

Visit https://photos.app.goo.gl/rwFMmNX2pB2VYjm69 for more of his photos of this event by Glenn C. Silva. 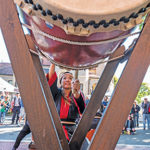 Ger Tysk performs with the taiko drumming group ShinDaiko in front of Fairhaven town hall at the 17th Manjiro Festival on 10/5/19 in the center of Fairhaven. Photo by Glenn C. Silva. 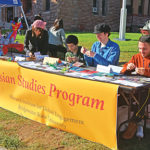 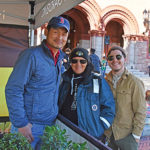 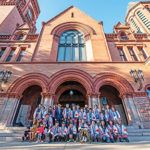 Visitors from Japan pose for a group shot in front of Fairhaven town hall with members of the Whitfield-Manjiro Frienship Society at the 17th Manjiro Festival on 10/5/19 in the center of Fairhaven. Photo by Glenn C . Silva. 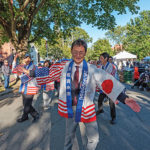 Visitors from Japan lead the goodbye “Tosa” dance on Center Street in front of Fairhaven town hall, at the 17th Manjiro Festival on 10/5/19 in the center of Fairhaven. Photo by Glenn C. Silva.