The organization held a ribbon cutting ceremony on Friday, 10/13, at the new location, welcoming con­sumers, board members, and the public to tour the building and learn about the group’s mission.

M.O. L.I.F.E President, Charles K. Murphy, Sr., gave a tour of the building, and noted that most of the furniture in his office was left there by the previous tenant, including wooden shelving and a white board with presentation screen. 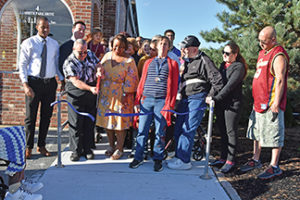 Brian Blanchard cuts the ribbon at the new office of M.O. L.I.F.E. Inc. at 4 Lambeth Park Drive in Fairhaven, at an open house on Friday, 10/13/18. Photo by Beth David.

The organization held a ribbon cutting just three years ago, when they doubled in size opening a new office at 105 Sconticut Neck Road, Fairhaven. The new digs mean they have now tripled in size, said Chief Operating Officer Ivan Brito. He said they have double the staff and offer more services than ever before.

“This is just an adjustment to that,” he said.

All services are provided through contracts with a variety of agen­cies, such as the Mass. Rehabilitation Commission, Mass. Department of Developmental Services, and Coastline Elderly.

Mr. Brito told the crowd of officials, workers, volunteers, board members, and MO LIFE consumers, that he  was “looking forward to the future.”

He said he was proud of the work they do, and stressed that they do it together.

Mr. Murphy reminded the crowd that they had expanded just last year.

“Who knows what ribbon we’ll be cutting,” in another year, he said.

He also told the crowd about “Katie’s Law,” named after Katie Brienzo. It is an important piece of legislation, he said, that will change the “nomenclature,” in laws by elimi­nat­ing offensive language in state statutes, including the purging of the words “retarded” and “retardation” in laws and department names.

He praised the aides in Sen. Montigny’s office for helping with the legislation, which has not passed yet, but is “very close” to becoming law.

He also thanked the consumers of the services: “Without you, there would be no M.O. L.I.F.E.”

“You have blessed our lives by being part of our lives,” said Mr. Murphy. “And you have overcome so many things, we are amazed.”

Then Brian Blanchard, a consumer of M.O. L.I.F.E. services, cut the ribbon, surrounded by workers, volunteers, and fellow consumers.