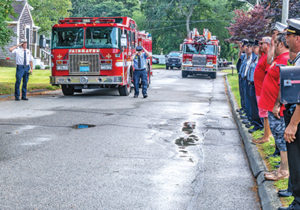 According to the Fairhaven Fire Department, Lt. Lincoln had more than 45 years of service in Fairhaven. He started as a volunteer firefighter in 1976, was hired as a call firefighter in 1978, becoming permanent in 1986. He was appointed to the rank of lieutenant in 1991.

In the mid-2000’s he put himself through paramedic school. He  became the EMS/Training Lieutenant in  2015, serving for five years.

Lt. Lincoln is also the assistant superintendent of the Fire Alarm. He worked under the late Lt. Earl Faunce to design and connect the town’s fire alarm system. As technology progressed and moved everything to radio boxes, Lt. Lincoln was responsible for the transition to a modern-day alarm system.

Lt. Lincoln also served in many positions with the Fairhaven Firefighters Association Local 1555, including president and vice president.

He had the nickname “Tall Bob,” and was known for his calm demeanor on the ground during fires. 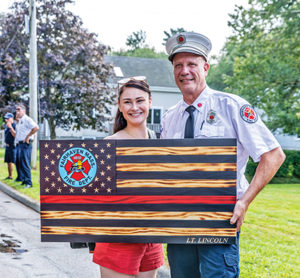 Fairhaven Fire Lt. Robert “Tall Bob” Lincoln poses with his daughter Rachel Allen with a wall hanging she gave him after his last ride home on 8/27/21. Photo courtesy of Margie Green Joseph.