It all started with a rower’s passion, which may be redundant because all rowers have passion, right?

Pat Kavanagh, who came to rowing six years ago and got hooked, was surfing around the web looking for new places that he and his crew could row. Last fall, he stumbled on the “Great River Race,” a 21.6 mile row from London Docklands to Ham in Surrey.

It is billed as London’s River Marathon, and takes place on Saturday, 9/8, this year.

“A spectacular boat race up the River Thames, it attracts over 330 crews from all over the globe,” according to the website. “The Great River Race appeals to every level of competitor!

From dedicated athletes who like winning, to those who enjoy laughter, fancy dress and charity stunts, it’s a great fun day out for both competitors and spectators.”

Mr. Kavanagh asked around and had lots of people (more than 20) say they were interested.

Of course, as time went on, people dropped out. There are now 11 confirmed rowers, with flights and hotels booked, ready to go.

Because the race (sort of) com­memorates the days when the river was a means of transporation, all boats must also have a passenger on board during the race. 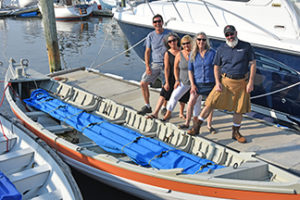 L-R: Pat Kavanagh, Lauri Bissonnette, Estelle Goulart, Nancy Carliss, and Mark Hurley, show a little leg at one of the boats they normally row. They are part of the newly formed Whaling City Rowers, who will be traveling to London for the Great River Race rowing competition on 9/8/18 to race along the Thames. Other members of the group are Eileen Sorentino, Sarah Innes, Mary Kavanagh, Betsy Johnson, Elizabeth Brinkerhoff, Cindy Zembos. Photo by Beth David.

One glitch, that does not seem to worry the Whaling City Rowers, is that they will be using a type of boat they have never rowed before. They normally use narrow whale boats, with one person at each row station. In London, they will be using a Beetle Whale Boat, a type of boat that seats two rowers at each station, side by side. The boat they are using is two feet shorter than what they are used to and wider. The Beetle Boat traces back to James Beetle who was a famous whaleboat builder in New Bedford in the 1800s.

The group has been able to borrow a boat from the Mass Maritime Academy that is similar to the one they are renting in London, for at least one practice run. They will also get one practice row in on the rental boat, “Big Phil,” the day before the race. Which is good, they joked, because at the time of the interview, none of them had ever rowed side by side.

Everyone in the group is passionate about rowing, and jumped at the chance to do something so different, most of them “just for the fun of it,” said Estelle Goulart.

“I love rowing,” said Mark Hurley, who has rowing trips planned all over Scotland the week before the race. “I will row anywhere I can.”

“Going with the flow,” said Lauri Bissonnette, who helped Mr. Kavanagh as much as she could with the arrangements, which were very time consuming for almost a whole year. She said they would row early in the morning (the dawn patrol), then meet for a latte downtown, where Mr. Kavanagh first mentioned the Great River Race. The rest is history.

Nancy Carliss said she listened to Mr. Kavanagh talk about rowing for three years and finally decided to try it herself. That was three years ago.

“Now I’m totally hooked,” she said, adding that she is “very adven­turous,” and looks at the trip as a great adventure.

The Group has a logo and t-shirts that they will wear during the race. And they feel they are in great shape to make the area proud of them.

As far as they can tell, they are the first group from this area to compete in the race that started in 1988 with 20 boats. This year, 330 crews are expected. And they do hope to make it an annual tradition.

“We’re blazing the trail,” said Mr. Kavanagh, who downplayed the

idea of winning, but still….

He said they only get four hours. When the tide changes, they all get kicked out of the water.

The group has chosen a charity, although it was not necessary to join the race. They are asking people to support them by donating to the Buzzards Bay Coalition, directly, on their website. None of the money goes to the rowers, they stressed.

“If you’re a rower, we pretty much have the same feeling of being adventurous,” said Ms. Goulart. “We want adventure, we love the sea. That’s why we’re here. But we get to row year round [in SE Mass.]”

To learn more about the race, visit https://www.greatriverrace.co.uk

To donate to the Buzzards Bay Coalition in honor of the Whaling City Rowers, visit http://support.save buzzardsbay.org/GRR