Allen Lentini is not shy about admitting that his life was in a rut. On the surface, it all looked good: His own successful business, a nice house, a good relationship with a woman.

But, something still wasn’t right. He was drinking every night, a lot. Still, the drinking itself did not cause problems, he said. 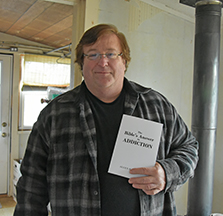 Allen Lentini wrote “The Bible’s Answer to Addiction,” in hopes that others with an addiction problem will find hope. Photo by Beth David.

“I was a happy drunk,” said Mr. Lentini.

Then addiction took the life of his girlfriend Simone.

“I was going nowhere,” said Mr. Lentini, just work, then home alone drinking. “Life was passing me by.”

After Simone died, he decided he did not want to support an industry that killed his fiance.

So he cleaned up his act, turned to his religion to help him do it, then turned to helping others. He said his pastor asked him to lead discussions on how the bible could help people beat addiction, and he did. At some point, those lessons became the basis for his book, The Bible’s Answer to Addiction.

When his pastor asked the congregation how many people were affected by addiction, every single hand went up.

Addiction is a “plague upon the com­munity,” said Mr. Lentini. “This book is my way to engage the drug war.”

Writing a book was never on his “bucket list,” he said, and he wasn’t sure he could do it. But, now that he did, he’s working on another.

“It was a way to get those sorrows out of my own life and do something positive for others,” he said.

He believes America is in a state of sorrow because of addiction with 70,000 drug related deaths a year. And he believes that accepting Christ is the best way out of the addiction life.

That is what he hopes people will get out of his book.

“I want them to see how Jesus Christ changed my life,” he said. “How He gave me hope to get out of addic­tion, and He can do the same for them.”

He said everyone should read the book, those who have addiction themselves, and those who know others who have an addiction.

“It will bring them hope,” said Mr. Lentini. “To see there is a plan and a purpose for them beyond addiction.”

The 79-page paperback costs $12.95 and is published by Christian Faith Publishing. It is available on Amazon. com and BarnesandNoble.com.