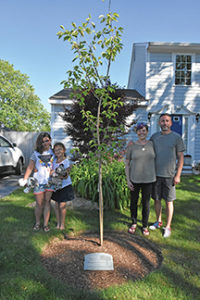 L-R: Sierra Palmer, Cora Dias-Mourao, Monica and Josh Palmer, pose near a Cherry Blossom Tree planted in the Palmers’ yard in Fairhaven memory of their daughter Teagan who died in February at the age of six. Photo by Beth David.

Little Teagan Palmer did not have a lot of years on this earth, but she still managed to touch a lot of lives. Her sudden death in February, from meningitis, sent shock waves through the LL Wood School, her little friends and their families, and the entire community of Fairhaven, and beyond.

“I can’t even tell you, the whole community has just been amazing,” said Teagan’s mom, Monica.

Their front yard now has a Cherry Blossom tree, “the tree of life,” said Monica, with a plaque saying it was planted in memory of Teagan: “Rooted in Love, Always in Our Hearts.”

It was donated by Supreme Perfec­tion Dance Studio, which was not even Teagan’s dance school, said Monica. She went to Dancemakers, and they remembered her, too, with a moment of silence.

The Wood School is also remem­ber­ing Teagan, with the “Teagan Palmer ‘Ray of Sunshine’ Award” that will be given to a kindergarten student at the school each year.

It reads: “In Recognition of your kind spirit and positive vibes shined on all around you! ‘Keep Smiling and Surely the Sun will Shine Through.’”

“The school has been amazing,” said Monica, giving lots of support, including counseling for Teagan’s sister Sierra.

Both girls are adopted from the Department of Children and Families. They got Sierra first, and then when Teagan was born, the state asked if the Palmers would be willing to take Sierra’s sister, too.

“It took about two minutes to say ‘yes,’” said Monica. 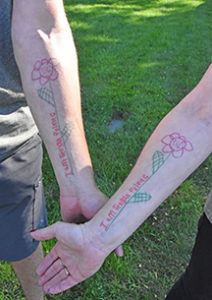 Josh and Monica Palmer got matching tattoos of an illustration that their daughter Teagan made. Teagan died at the age of six in February. Photo by Beth David.

She had more than her share of challenges, including severe hearing loss, although cochlear implants helped her hear; and a few other physical challenges. But she did all the things other kids her age did, and she had a lot of friends.

“She went through a lot to get where she was,” said Teagan’s dad, Josh. “A lot of therapy, services. Between services and DCF, they were here all the time.”

The school placed a bench along the LeRoy L. Wood School Trail, a hiking trail located in the woods behind the building.

“Along the trail you will find a special area in honor of our sweet friend, Teagan,” reads the marker at the trail head. “The Wood School community worked together to create a special place to rest, read, relax, and remember Teagan.”

Teagan’s classmates placed “kindness rocks” around the trees near the bench. Kindness rocks have kind messages on them and are placed around the community to spread a little happiness.

“My Sunshine,” says one.

“I loved you,” says another.

This bench honoring Teagan Palmer is along the Wood School hiking trail in the woods behind the school. Photo by Beth David.

There are also plans to place a “Little Library” near the bench, so people can sit and read a book, including a book Teagan wrote for a school project.

The bench is signed in Teagan’s own handwriting, too, with a heart she drew. Her mom and dad got matching tattoos with an illustration made by the budding artist: A red flower with two green leaves, and the words, “I am Teagan Palmer.”

Sierra, 10, no doubt misses her little sister, but she has learned what it means to be part of a community.

The words tumbled out of her in the most natural way imaginable, melting her surprised mother’s heart, who gave her and her friend a real hug.

“I miss her a lot,” said Cora Dias-Mourao, 7, Sierra’s friend and neighbor. “Because she was my best friend and Sierra’s sister. I miss her from all those days ago.”

“She touched a lot of hearts, a lot of people I don’t even know,” said Monica, adding that Teagan did not suffer, she was very happy.

“She didn’t even know she was disabled. She embraced it,” said Monica. “We’re just very grateful to everybody. Everybody in the commu­nity has been amazing.”

Josh said he probably spent the most time with her, because he works nights.

“She was my little buddy,” he said, and then he couldn’t say anymore.••• 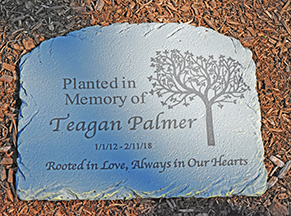 This plaque is at the foot of a Cherry Blossom tree at the house of the family of Teagan Palmer who died in February at age six. Photo by Beth David.