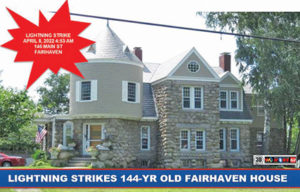 146 Main St., Fairhaven was struck by lightning on 4/8/22. No injuries were reported. Photo graphic by ML Baron.

“We are all okay… Just some minor damage… The lightning hit the tree on the corner of the house and hit the gas main,” Ed Macedo, owner

The Fire Department received the call from the frantic owner at 4:53 AM, stating that their house was struck by lightning and there was smoke in the house. There were no injuries, Eversource was notified.

Attention was focused on the gas main going into the house. The wiring inspector also responded. The struc­ture remained mostly unscathed.

“I was at work at Eversource in the system operations control room when it hit… Mad dash home!” said owner Ed Macedo

The storm system was from a low pressure area headed from New York City with a cluster of severe thunder­storms and heavy rain that passed directly overhead of town. Brilliant flashes of lightning lit up the harbor.

A nice day followed with temperatures hovering near 60 along the coast.

There were also reports of at least two other lightning strikes in Fairhaven. No injuries have been reported.