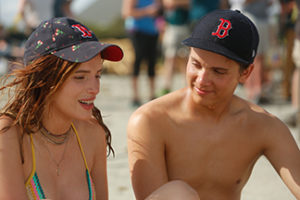 Lifetime has made a movie, “Conrad and Michelle: If Words Could Kill,” based on the suicide death of Conrad Roy III, whose body was found in the Kmart parking lot in Fairhaven in July, 2014. Michelle Carter was found guilty of involun­tary manslaughter in his death for her series of texts and phone calls urging him to kill himself.

Mr. Roy, 18, started a gas-powered water pump inside the cab of his pick-up truck and died from carbon monoxide poisoning.

After a check of his cell phone, Fairhaven police detectives began investigating the possibility that Ms. Carter had coerced Mr. Roy into killing himself. She was indicted in February, 2015.

On June 16, 2017, Ms. Carter was found guilty by Judge Lawrence Moniz in Taunton Juvenile Court where Ms. Carter was tried as a youthful offender because she was 17 in July, 2014. She turned 18 on August 11 of that year. On August 3, 2017, Judge Moniz sentenced Ms. Carter to 30 months in the Bristol County House of Correction, with 15 months to be served and 15 months sus­pended. Then the judge stayed the sentence until all state appeals are exhausted. The appeal is set to be heard in front of the Mass. Supreme Judicial Court on October 4.

If she loses the appeal, she will have to serve the 15 months. She also may not re­ceive any mone­tary gain from her story while on probation, which ends on 8/1/22.

The movie uses flashbacks, from the courtroom to the relationship between the two troubled teens. Clearly not shot in Fairhaven or New Bedford, the movie paints a rather crusty picture of Conrad’s father (Rodney Rowland) and grandfather, who work as tugboat captains and own Tucker-Roy Marine Towing.

Conrad’s mother, played by Paula Marshall, is portrayed more sympa­thetically throughout, even before the tragic death.

The movie mostly seems to stick to the actual events and texts, although it does take some liberties. It is, after all, a movie, not a documentary.

Whether or not either teen is portrayed sympathetically is some­thing viewers will have to decide for themselves.

The movie does, however, have all the hallmarks of a hastily put together film. At least, though, it does not try to do too much. It focuses on the texts and does not try to force too much into its 1:26 time frame.

At the end, it tells viewers they may text “CONRAD” to 741741 if they have suicidal thoughts.

Conrad’s mother and father did not respond to requests for comment on this story by press time.