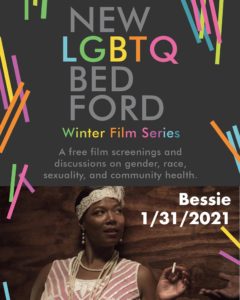 While COVID-19 still impacts us in 2021, the New Bedford LGBTQ Winter Film Series still lives on! Thanks to funding and support provided by Mass Humanities, the Film Series will run digitally this year. Fans are suggested to watch the films prior, which are available on most stream­ing services and platforms. There are several DVD copies of each film located at the New Bedford Free Public Library — all you need is a SAILs library card and a quick phone call!

The series kicks off with a discussion about the HBO biopic about legendary blues singer Bessie Smith on Sunday, January 31 at 3 PM. Speakers present will talk about the Harlem Renaissance, blues in general, and the impact of Black LGBTQ+ people in the arts. To join the events, follow the New Bedford LGBTQ Winter Film Series on social media for appropriate links and passcodes.

“With COVID-19, we had to look at how we can restructure our format,” said Dan Everton, Co-Chair, “That is why we are happy to continue our programming online, in addition to a new, exciting way to make an impact on the community.”

New this year, the New Bedford LGBTQ Winter Film Series has the wonderful opportunity to give back to the community of artists, filmmakers, and LGBTQ people in our community. The Film Series will launch a Mini-Grant in March aimed to help burgeoning and student filmmakers in the LGBTQ+ community make a short film. In addition to a small stipend, recipients will have the opportunity to show their short films in October 2021 during LGBTQ+ History Month. Be sure to keep tabs on the Film Series for more details.

All films are to be watched on their own, and the Zoom event will be a discussion with guest panelists. Mark your calendar now so you don’t miss out!