The word “overwhelming” came from the mouth of Stephen Almeida a lot on Friday, 9/6/19, as he looked out at the group of his fellow firefighters who gathered to wish him a happy retirement. Mr. Almeida’s “Last Ride Home,” took him from Fire Station 1 in Fairhaven to his home on Abbey Street in Fairhaven, where friends and family waited to greet him.

Firefighters in their dress uniforms, and town officials, lined the road in front of his house; family and friends huddled under canopies to dodge the rain; and the last announce­ment crackled over the pagers of the firefighters, giving the all clear for his shift to end.

He told the younger firefighters to carry on the traditions of the firefighting service, saying there are many great traditions that should be continued.

He also credited the late Earl Faunce with helping him along, especially at the beginning.

“If not for Earl Faunce, I would not have lasted 41 years,” said Mr. Almeida, adding that he could not have done it without the help of his family.

Call firefighter David Dompierre who attends Mass. Maritime Academy, said he had only worked with Mr. Almeida a few times, but felt he was a “good guy.”

Charlene Paulson said her father worked with Mr. Almeida at the Fire Department for “many years.”

She said he was a “great person, an excellent firefighter.”

Ms. Paulson said he went “above and beyond what he had to do.”

“He was always willing to lend a helping hand and do anything for anybody that needed it,” said Ms. Paulson. “I’m sure he still will be.”

Chaplain Bob Langevin said he did not know Mr. Almeida that well, but knew him to be a dedicated person.

“I’m so honored to be able to serve with him for the time I had,” said Chaplain Langevin. “I know he has done so much for the town of Fairhaven.”

Mr. Almeida’s wife Cheryl joked at first about having mixed feelings about the retirement.

And, of course, retired people always have lots of projects lined up, right?

Retired Deputy Chief Donn Fletcher was back in his dress uniform for the occasion. He said that he and Mr. Almeida were on the same shift for awhile.

“I have nothing but good to say about him,” said Mr. Fletcher. “He’s a hard worker, smart.”

Does the veteran retired guy have any advice for the newbie retiree?

Mr. Almeida started his career with the fire department as a call-firefighter in 1978. He served nine years as a call firefighter before being appointed full time in 1987, and served the town as a full time Firefighter for the next 32 years. He assumed various responsibilities in the department and in the fire­fighters union, including 20 years as union president. 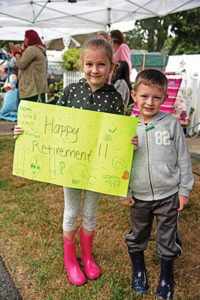 Olivia and Lucas display a sign for their family friend Stephen Almeida wishing him a happy retirement after his “Last Ride Home,” as a Fairhaven Firefighter on 9/6/19. Photo by Glenn C. Silva. 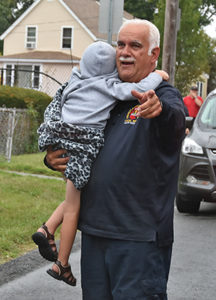 Retiring Fairhaven firefighter Stephen Almeida gets a big hug from little arms while greeting those who lined up in front of his house to wish him well on his retirement at the traditional “Last Ride Home” on 9/6/19. Photo by Beth David. 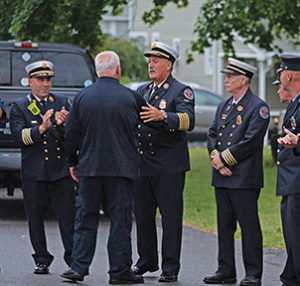 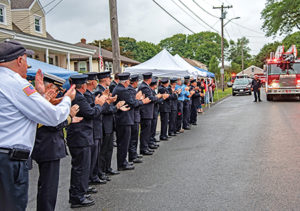