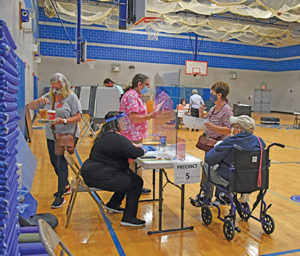 Sandy and Joe Perrone, wearing masks, as are poll workers and other voters, receive their precinct five ballots at the Recreaton Center to vote in the local election in Fairhaven on 6/8/20. Photo by Beth David.

Fairhaven’s election saw an upset on Monday, 6/8/20, when challenger Keith Silvia ousted long time incumbent Charles K. Murphy, Sr., after an election season that was extended due to postponements from the COVID-19 pandemic.

Voters were required to wear masks, and were greeted by poll workers wearing masks, gloves, and sometimes face shields, sitting behind plexiglass barriers. Voting booths were cleaned after each use, and voters were asked to use their own pens or pencils on the ballot. Voters were also kept at least six feet apart while in the room.

Results were not certified by press time, but unofficial results gave Mr. Silvia the win by a large margin, 1,149 to 1,000.* Voter turnout was 18.8%, with 2164 of 11,509 voters casting ballots. This year saw a big increase in absentee ballots cast, an option more people took advantage of due to the COVID-19 crisis. The town clerk’s office sent out 280 absentee ballots, and 234 were returned and counted; they usually send out 40-70.

After the election, candidates were invited to address voters for a live cablecast on Channel 18, the govern­ment access channel.

“I really thank all the supporters out there that have really supported me throughout the years,” said Mr. Murphy. “I really appreciate all of you.”

He said he was looking forward to spending more time with his family. 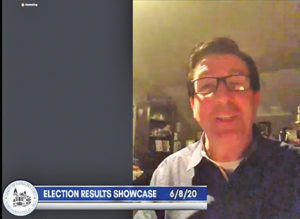 “This has freed up a lot of time in my schedule, let me tell you,” he said. “Good luck with the phone calls at one o’clock in the morning and through­out the day, because, let me tell you, a weight has been lifted off my shoulders.

He added: “But I just want to say “good luck” to you and congratulations.”

In a phone interview after the election, but before the government access event, Mr. Silvia said he was “shaking.” A lot of people said he could not beat Mr. Murphy because he had been there so long.

“It was just determination. I’m determined,” said Mr. Silvia. “We have to make change. I felt a lot of people felt the same way.”

He said he knows he has a lot to learn, but he was “feeling good.”

“I’m happy I didn’t let my people down. I had a lot of people working for me,” he said. “You can’t do something like this alone. You have to have a lot of people helping you.”

He also said he paid for almost everything for his campaign, because he did not want to take people’s money and lose, even though people told him it’s just politics.

“I’m not a politician. I’m just a plain working man,” said Mr. Silvia. “And that’s how I’m going to be as a selectman. I just say it like it is. If people make fun of me, that’s fine. I’m just going to try and do my best for the taxpayers of Fairhaven.”

Mr. Silvia echoed those remarks on camera, and also said that the negativity of the campaign helped him.

He said at the beginning, someone called his supporters a “bunch of goons,” and that lit a fire under them.

He also said that the day before the election he was called a racist and a  bigot.

“That hurt me,” said Mr. Silvia. “My granddaughter, the love of my life is Cape Verdean, Puerto Rican, Domini­can, Portuguese. So it takes an ignorant person in my book to say that kind of thing about someone they don’t know.”

Mr. Silvia said he was looking forward to working with Selectboard member Dan Freitas, an outspoken supporter, and board member Bob Espindola.

Mr. Silvia also said he was “very, very, very eager to work with Mr. Rees,” the Town Administrator, of whom Mr. Silvia has been very critical.

“My campaign was run on change,” said Mr. Silvia. “That’s what I feel why the voters voted for me. They were looking for something to start the changes around here. And I’m going to try. If it’s right or wrong, I’m doing it my way.”

Mr. Freitas sang Mr. Silvia’s praises saying he had his back from the start, and commending him on the way he ran his campaign.

Mr. Espindola said he had not heard about the negativity, but it was “not appropriate.”

“It’s a shame to hear that,” said Mr, Espindola. “However, I try to keep things positive.”

He said the voters were looking for something different, and “you’re here,” adding he looked forward to working with Mr. Silvia, “To see what can be done to improve things in Fairhaven.” 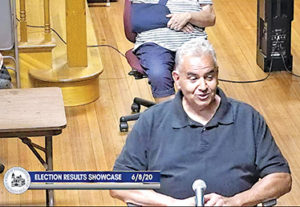 “I look forward to working with the both of  you and I think it’s going to be a new era,” said Mr. Silvia with a big laugh.

There were no other contested races in Fair­haven. All other candi­dates were unopposed, except for a last minute write-in campaign for Board of Health.

Michael Ristuccia was on the ballot for BOH, but Patricia Pacella launched a write-in campaign that she only announced publicly last week.

There were 291 write-ins for BOH, although Town Clerk Carolyn Hurley said she could not say if they were all for Ms. Pacella by press time.

Mr. Ristuccia, who received 1276 votes, was at town hall to address the voters.

“I’d like to take this opportunity to thank the voters of Fairhaven for their trust in me,” said Mr. Ristuccia, and promised to do the best job he could. “And I look forward to the challenge.”

Mr. Freitas said Mr. Ristuccia was the man to “straighten things out.”

“I’m sure you’ll have that Board of Health running like a well-oiled machine within the next six months,” said Mr. Freitas.

Ms. Pacella addressed voters via Zoom, and thanked the 291 voters, adding that even though she only started her write-in campaign a little while ago, “291 votes is not that bad.”

Ms. Kuechler, who was having some audio issues in her remote connection, thanked voters and said she was looking forward to her fifth term.

“I’d like to thank the voters of Fairhaven for trusting me for another term,” said Mr. Monroe. “I really enjoyed my time working with everyone moving our school district in a positive direction.”

He also thanked Mr. Murphy for his years of service.

“It’s not easy serving in any capacity in town politics,” said Mr. Monroe, adding he was “really happy to continue to serve.”

Board of Public Works candidate Cameron Durant also addressed voters, noting that the town has a “lot of challenges” coming up with the mandated upgrades to the wastewater treatment plant.

Both Mr. Freitas and Mr. Espindola praised the town clerk for her extra effort getting the polls ready, and putting the extra precautions in place due to the pandemic.

“I’d like to thank all the poll workers who came out,” said Mr. Espindola. “And the town clerk’s office did a really great job.

Election results, with unofficial numbers as of press time are: Keith Silvia 1149, Charles K. Murphy, Sr., 1000 for Selectboard; Pamela Kuechler 1579, Brian Monroe 1315 for School Committee; Michael Ristuccia 1276, and 291 write-ins, most of which are probably for Patricia Pacella, for Board of Health; John Rogers 1537 for Commissioner of Trust Funds; Cameron Durant 1401, and Brian Wotton 1357 for Board of Public Works; Jeffrey Lucas 1294, Jay Simmons 1259 for Planning Board; Carol Alfonso 1532 for Housing Authority.

The election result showcase is available on demand at https:// livestream.com/fairhavenlive/events/7223638.

*Please note that numbers changed from election night due to hand counts being included.