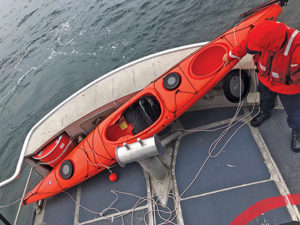 This is a photo of a found kayak in Salem Channel, Saturday, Sept. 14, 2019. Coast Guard Station Gloucester rescue crews got underway in search of a missing kayaker reported earlier that day and were able to locate the man alive less than an hour later wearing a life jacket. (U.S. Coast Guard photo)

Two rescue boat crews from Station Gloucester and crews from the Salem and Beverly Harbormasters launched. When they arrived on scene, the kayak held a dry bag containing a set of keys and a t-shirt.

After searching for about an hour, the Beverly Harbormaster rescue crew found the kayaker wearing a life jacket. He floated in four-foot seas for about three hours.

“A life jacket really saved this man’s life,” said Ensign Isabella Stoyka, the duty public affairs officer for Sector Boston. “If his kayak was labeled, we may have found him sooner.”

The water temperature was 66 degrees and winds were about 20 knots.

His kayak was not labeled.

If you are going out on your kayak, the Coast Guard recommends you check the weather, tell someone where you are going and when you will be back, wear a lifejacket, have a sound-making device, and label your  ayak. If you are paddling at night, make sure you have a light.

Through the Operation Paddle Smart Program, the Coast Guard offers owners of kayaks, canoes, standup paddleboards, and other unregistered watercraft a free “If Found” sticker for their boat to help reduce the number of unnecessary search and rescue cases. Stickers are weatherproof, reflective, and provide room for the vessel owner’s name and two phone numbers, written in waterproof marker.