Christoper Richard never pre­tended he could end the controversy about where John Cooke is buried.

He has plenty of material to debunk the theory that John Cooke was buried at Cooke Memorial Park, he even tracked down when the rumor started. But he also admits that no one knows where he is buried.

John Cooke was on the Mayflower, and those 34 families are among the most studied on the planet, definitely in the country, said Mr. Richard.

And in all the books and research, there is no way to figure out for sure where John Cooke was laid to rest.

At a special event on Friday, 3/16, in the Fairhaven Town Hall auditori­um, and sponsored by the 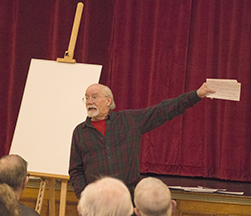 Chris Richard gestures during a talk on John Cooke, at Fairhaven Town Hall on Firday, 3/16/18. Photo by Beth David

Mr. Richard, a local historian, is also the town’s Director of Tourism.

In addition to following Mr. Cooke’s chronology, from his arrival on the Mayflower at 13 years old, Mr. Richard traced his descendants and the land they owned locally, with a few fun stories thrown in for good measure.

Mr. Richard recited the names of the Cooke children, the people they married, and the children they had, and painted a picture of large families having larger families and spreading across the area. He made the connections of who was related to whom and how.

The names are familiar ones: Delano, Cushman, Warren, Hathaway, Wilcox, Taber, West (yes, that would be how West Island got its name).

John and Sarah Cooke had five daughters, giving their heirs many names other than “Cooke.”

The Cookes were not even sup­posed to be on the Mayflower, said Mr. Richard. But the boat they were supposed to take had a problem, so they switched.

Mr. Richard spoke about John Cooke’s father, Francis, and other family mem­bers, the land they bought, the work they did, and the religious affiliations they had.

They left Europe for religious freedom, then a conflict with the church in Plymouth, where they first settled, ended with John Cooke moving to Dartmouth, which was the whole New Bedford area in the 1600s.

John Cooke purchased 116,000 acres from Chief Massasoit in 1652, but did not settle here right away.

Eventually, the increasing “oppres­sion” in Plymouth urged Mr. Cooke to move away to the wildernesss of Acushna, as the Native Americans called it.

According to tax records, there were five owners of property at the time.

“So, if you see a plaque that says John Cooke was the first white settler here, it’s probably not true,” said Mr. Richard.

He explained that the heart of Mr. Cooke’s homestead was close to where Benoit Square is now with the house being located at the intersection of Adams Street and Howland Road and went to about Route 195 to Glenhaven Avenue.*

He drew diagrams of the first roads, that started from Wampanoag walking paths, and slowly filled them in as different parcels were bought and people moved in, creating roads to get to their homes.

There were about 30 houses in 1675 when King Philip’s War started, said Mr. Richard. And they were all burned down. Mr. Cooke moved back to Plymouth for a time.

Mr. Richard made many connec­tions to the heirs of John Cooke and the historical sites we know today, such as the Taber chimney at the Bates house on Main Street. Mr. Cooke’s daughter married a Taber. Mr. Richard said there is no doubt that John Cooke stood in front of the chimney.

As for where John Cooke is buried, Mr. Richard said he believed that he was buried on his own land in a spot that is now behind the Century House in Acushnet. He comes to that belief by reading descriptions in the will and other documents, including finding a nick­name of “Howard’s Neck” for the place, and it was a burial ground. John Cooke described that place in his will, said Mr. Richard. It does not prove he was buried there, however.** 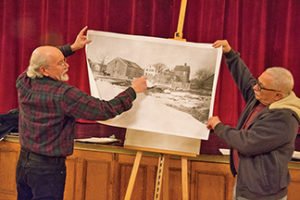 Jeff Lucas (RIGHT) lends hand so Chris Richard can point out the spot where legend has it that John Cooke is buried in what is now Cooke Memorial Park. Mr. Richard said the photo shows that the spot was used for other purposes over the years, besides being a burial ground in the 1700s.*** Photo by Beth David.

But Mr. Cooke never owned the parcel that includes Cooke Park, which is at the end of Pilgrim Avenue at Cherry Street in North Fairhaven.

Mr. Richard also had a picture of Cooke Park before it was a park, and it has barns and other structures on it, despite being a burial ground previously.***

He said he started research so he could promote the site for tourism, but then discovered: “We were about the only ones in the whole world that believed John Cooke was buried in that park,” he said.

Associa­tion in 1988. Mr. Dexter told the FIA that Cooke was buried there.

“All of a sudden, everyone in the world went crazy,” said Mr. Richard. “We don’t know why he said it. There was no evidence.”

A month later, he said, using minutes from the FIA records, he discovered the FIA proposed placing a plaque at the site.

He said “no one knows” if Professor Dexter had any evidence, or what he based his belief on.

But then there were articles in the newspapers, and now there is a plaque there.

So, the short answer to where John Cooke is buried is: “We don’t know,” said Mr. Richard.

He also said that as tourism director he sees many visitors, Mayflower descen­dant aficionados from all over the world.

“They realize it’s just a legend,” he said.

Several people asked questions and commented, including Cathy Delano who asked about Cooke Park and the push to designate it a cemetery. The Board of Public Works has already banned organized events there, due to the controversy.

Mr. Richard showed the photo again, with a barn on the property. He noted the Mass. Historical Commis­sion said the park could still be used.

Mr. Richard also made it a point to tell those gathered that the family bible of Bartholomew West, John Cooke’s grand­son, was stolen by the British in the raid of 1778. It is on display in Bodmin, England.

“They still won’t give it back,” said Mr. Richard, musing that if people went in a group, the might be able to pilfer it back.

“I’m not abdicating theft,” said Mr. Richard. “It would be returning stolen property.”

*Fixes error from previous versions (the property did not extend to Parting Ways).

**Fixes error from previous version (Cooke did not ask to be buried there in his will, he described the spot in his will).

***Fixes errors from previous versions (not disputed that it was a burial ground at some point, but proves it was used for other purposes over the years).