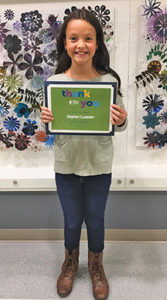 Jaylen Lussier holds up the official thank-you she received from Boston Children’s Hospital on Monday, 10/8/18, for donating $2,195.00, money that Jaylen earned by selling lemonade this summer. Photo submitted.

Jaylen Lussier, who has been selling lemonade all summer to raise funds for Boston Children’s Hospital, turned in an impressive $2195.00.

The Fairhaven ten-year-old traveled up to BCH on October 8, to present the traditional over-sized check to the hospital, get a tour, play a game live on the BCH “Seacrest Studios” (a radio studio by Ryan Seacrest), and get interviewed on the BCH station, which ran live on the hospital televisions.

The money was donated to the hospital with no restrictions to help children have a better stay at the hospital.

Jaylen’s father, Jarrod, said the money will be used for departments like Seacrest Studios that pro­vide children opportunities to “play games, have fun, and maintain some sort of normal­cy in their lives,” he wrote in an email. “It is also used to assist families whose children stay at the hospital for ex­tended periods of time.” ••• 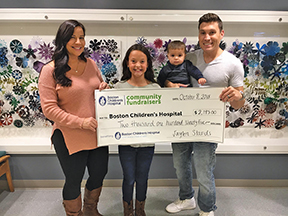 Jaylen Lussier (center) poses with her mother, Brandy, her father Jarrod, and little brother Jagger on Monday, 10/8, with a check for $2,195.00 for Boston Children’s Hospital, money that Jaylen earned by selling lemonade this summer. Photo submitted.