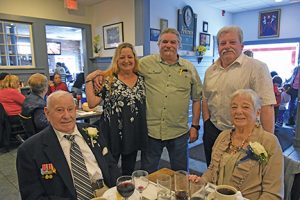 L-R standing: Lori, Greg and Robert Leal celebrate the 70th anniversary of their parents, Jim and Dolores (seated), at a party on 4/24/22. Photo by Beth David.

Jimmy and Dolores Leal are pretty well known in these parts. They are known for all kinds of stuff, being active in the community. A Korean War veteran who survived Pork Chop Hill as a medic, Mr. Leal has been a strong advocate for veterans for decades and was named Veteran of the Year.

But it’s family that ties them together and family it was that celebrated with the couple as they celebrated 70 years of marriage. The group got together at Antonio’s in New Bedford, a favorite place for Jim and Dolores, on Sunday, 4/24, although the actual date of their anniversary is the 26th.

Jim’s two older sisters, Eva, 94 and celebrating her birthday on that day, and Palmira (Pal), 97, also joined the party, with Eva quickly becoming the life of said party regaling the crowd with stories and some gentle ribbing. 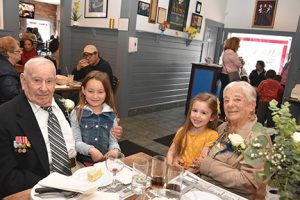 LEFT Jim Leal (seated) and his wife Dolores (RIGHT) celebrate their 70th anniversary with two of their great grandchildren, Kiley (with Jim) and Avery (with Dolores) on 4/24/22. Photo by Beth David.

“It’s a good day,” said Jim and Dolores’s daughter Lori, saying she has both parents alive and that is why.

Her dad doesn’t get out as much as he used to, he doesn’t walk all that great anymore and his memory is not as good as it was, but he still makes it to as many veterans’ events as he can.

And he still gives a big smile and a “how are you,” when he greets a friendly face, and will always tell you he is just fine.

“He’s an awe­some person who made me who I am today,” said Lori.

“I’m very proud of them,” said their son Robert, who has been married for 38 years. “We had a very good upbringing.”

He said he never saw his parents argue, although he does not doubt that they did, just, “not in front of the children.”

“We’re a very close family,” said Robert, adding that he was supported in anything he wanted to do, such as sports. 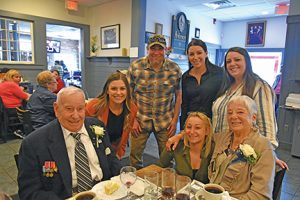 “We’re very proud they’re still together. It is not an easy task.”

The older son Greg, who traveled from Maine for the party, said it’s always a great day when he gets to see the family.

He said his mother was “amazing” for hanging in there all these years, through the “ups and downs, trials and tribulations.”

“And, you know my father, right?” asked Greg, only half joking.

Jim Leal has been active in veterans rights for years, appearing before a variety of boards in Fairhaven and other municipalities for a variety of causes. He was instrumental in getting the Veterans Day parade in Fairhaven started and there would not be a Korean War Memorial in New Bedford without the efforts of Jimmy Leal.

Ronnie Manzone served on the Select Board in Fairhaven during some of those years., and said in all the times that Mr. Leal went before the board, “He never went there for himself.” 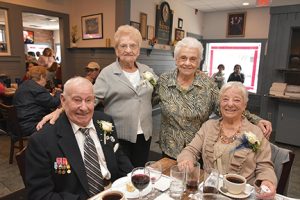 L-R: Jim (seated) and his wife Dolores celebrate their 70th anniversary at a party on 4/24/22, with Jim’s sisters (L-R standing) Eva and Palmira. Photo by Beth David.