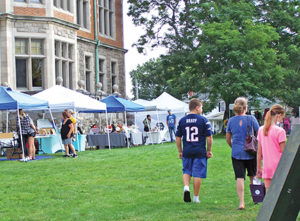 Booths are set up on the lawn of Fairhaven High School on 9/18/21, the final week of the Fairhaven Marketplace’s Season four. Photo courtesy of Christopher Richard.

Fairhaven’s Huttleston Marketplace wrapped up season four with its 9/18 event. According to Fairhaven Director of Tourism Chris Richard, more than 150 different vendors from throughout the region participated this season.

“Ten of the vendors who were there on the last day of this fourth season were also here on the very first day of our first season,” wrote Mr. Richard in an email. “Twenty-five, or more than one third, of the vendors to set up in 2018 also took part during 2021.”

Many of our regular vendors are looking forward to being here again in 2022.

Mr. Richard also posted a thank-you on Facebook to everyone who helped contribute to a successful Season 4.

“Thank you to the Fairhaven School Department for allowing us to use the property; John Charbonneau at Public Works for arranging the trash barrels and trash removal; David Flaherty and Jocelyn Bowers at the Health Department for the food permitting; Erin Hedges for being my stand-in during vacation week; and every vendor and shopper who came to the marketplace,” wrote Mr. Richard. 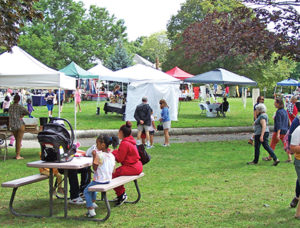 People mill around and take a rest at the picnic table in front of the Fairhaven Visitors Center while booths are set up on the lawn of Fairhaven High School on 9/18/21, the final week of Fairhaven Marketplace’s Season four. Photo courtesy of Christopher Richard.