The final Huttleston Marketplace of the season was a great success, with 65 booths, the most ever, on Saturday, 9/19/20, according to Fairhaven Office of Tourism Director Christopher Richard. The marketplace spread out way beyond its usual space to accommodate the extra booths and keep them apart to stay within COVID-19 guidelines.

Signs reminded people to wear masks, keep six feet away from each other, wash their hands and wash produce before eating it.

This year, however, there was no live entertainment, no bounce house or other extra activities that would compromise the COVID-19 guidelines.

Most vendors said that the season was a good one, with a surprising amount of foot traffic. Several said that it was one of the few that managed to stay open during the pandemic. Farmer’s markets were exempt from the closings as long as they followed the guidelines.

“It was very successful,” said Ms. Elliott, adding that there were many new people who dis­covered Fair­haven’s market­place because their markets were closed.

Market regulars Sharyn and Doug Meehan, how­ever, said they thought traffic was down for them. They sell framed jigsaw puzzles.

“It’s been an awesome day so far,” said Mr. Richard. “And a great, great season.”

He said many vendors joined for the first time this year because their regular events were canceled. Many of them said they will return next year, and a few already signed up. Vendors like the space, and although they will not be seven feet apart when not in a pandemic, Mr. Richard said that the HMP generally leaves more room between tents than other markets.

He said the vendors are all friendly with each other, and the whole atmos­phere is very friendly and fun. This year’s vendors were so satisfied with the experience that they gave him a thank-you card signed by all of them.

One of the things that sets the HMP apart is that vendors do not have to commit to all the weeks of the season.

For further information, contact the Fairhaven Office of Tourism at FairhavenTours@fairhaven-ma.gov, 508-979-4085; or https://fairhaventours.com/ 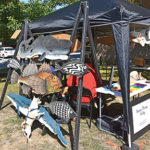 Charlie doesn’t quite know what to make of the items at Some Things Fishy at the Huttleston Marketplace on the last day of the season, 9/19/20, unless of course, he just smells food. Photo by Beth David. 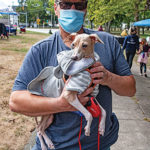 Ray and Gizmo, an Italian Greyhound, both of Fairhaven, pose for the local free sheet during the final Huttleston Marketplace of the season, 9/19/20. Photo by Glenn C. Silva. 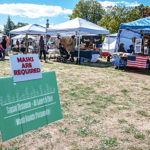 Signage around the last Huttleston Marketplace on Saturday, 9/19/20, gives friendly reminders that we are still in a pandemic. The outdoor market had its best year ever, with 65 booths on the last day, the most the marketplace ever had. Photo by Glenn C. Silva. 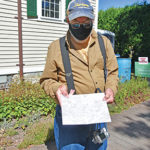 Fairhaven Office of Tourism Director Christopher Richard shows a thank-you card signed by all the vendors of the Huttleston Marketplace on the last day of the season, 9/19/20. Photo by Beth David. 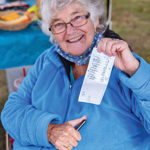 Barbara Bingham of “B and B Originals” keeps track of the masks she sells on a piece of notepaper during the final Huttleston Marketplace of the season, 9/19/20. Photo by Glenn C. Silva. 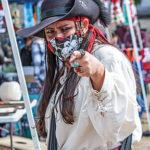 Since 1995, September 19th has been “Talk Like A Pirate Day” so Abby Black entertained with her unique dialect and humored the local free sheet with a quick photo shoot during the final Huttleston Marketplace of the season, 9/19/20. Photo by Glenn C. Silva.