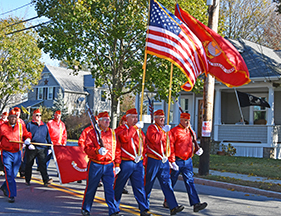 Veterans of the United States Marine Corps march along Main Street in Fairhaven on Veterans Day, 11/11/17. Photo by Beth David.

The 25-degree temperature did not stop hundreds of people from attending Veterans Day services in Fairhaven, although the lining of the parade route was a little sparse in spots. Veterans, civic groups and politicians marched from Benoit Square in North Fairhaven to the high school, where the “Big Flag” was raised. The 50’x30’ flag is only raised on special occasions, and only the GHS flagpole is big enough to accom­modate it. 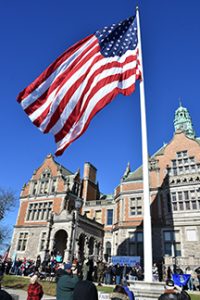 Activities at FHS included the National Anthem, firing of the small cannon and muskets by the Fairhaven Village Militia, “America the Beautiful” sung by Sylvester Santos, Jr., invocation by Barbara-Jean Tiles, bagpipes by William Bullard and “Taps” the FHS and Apponequet Regional HS buglers. Emcee was Donald LeBlanc, who, despite some sound system issues, managed to get each speaker to the mike.

“While you sleep, while you do your daily activities, they never blink,” said George Brownell, a Vietnam Veteran who helped organize the event, about the nation’s military service members. “They’re always there protecting you.”

Fairhaven Selectboard Chairper­son Bob Espindola told the crowd that he was happy to see young people lining the streets to show respect for veterans. He said it was important for adults to attend those kinds of ceremonies to send the message to children. 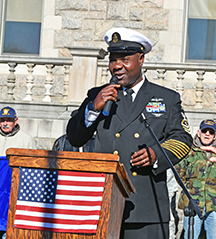 “This veteran may fade, but this veteran will not run,” said Mr. Jones, adding that it did not matter if veterans served in peace or war.

By raising your hand, he said: “It was a brave and selfless act, an act that deserves recognition.”

“Thank you,” he said. “Thank you for your unwavering service in peacetime and in war. God bless you, God bless our troops, God bless America.”

Emcee Donald LeBlanc reminded everyone that Veterans Day started out as Armistice Day for WWI veterans only, then was expanded to include all veterans after the Korean Conflict.

“So together we honor all veterans who [selflessly] placed their lives on the line for our freedom,” said Mr. LeBlanc. “They fought to protect our country and to maintain our way of life.”

Mr. LeBlanc also thanked those who helped with the parade and ceremony, and invited the crowd to VFW Post 2892 on Middle Street for a free buffet.