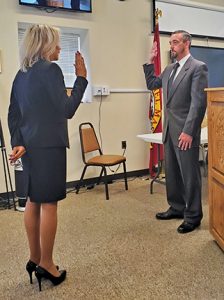 Acushnet Town Clerk Pamela Labonte adminsters the oath of office to newest Selectboard member Robert Hinckley on 5/17/22, after Mr. Hinckley won in an upset on 5/14. Photo courtesy of the Town of Acushnet.

Newcomer to politics, Robert Hinckley, pulled off a big upset in Acushnet when he beat incumbent David Desroches, 391-338* for Selectboard in the 5/14/22 election. Mr. Hinckley’s only other attempt at office was two years ago when he ran as a write-in candidate starting just a few days before the election. This was his first time officially on the ballot.

In the only other contested race on Saturday, Board of Health incumbent Thomas Fortin easily kept his seat against challenger Doug Thomas, 495-222*.

Mr. Hinckley was sworn in on Tuesday, 5/17 at a short SB meeting that re-organized the board and named board representatives to ongoing union negotiations. The board voted in David Wojnar as chairperson.

“Thank you, I look forward to working with the rest of the board and the town in general,” said Mr. Hinckley in his first words as a Selectboard member. “I’m pretty excited and I’ve got a lot to learn. And I’m going to dive right in today and get to work.”

“Kudos to Selectman Hinckley,” said Mr. Desroches in a statement. “As for me, I can walk away with my head held high with experiences and people I will always remember.”

Election results were a bit delayed this year, as the voting machines were not working. Votes had to be hand-counted, which lasted into the wee hours of the morning, end­ing around 12:30 a.m. Then the ballots had to be returned to the clerk’s office and the information entered into the system. Town Clerk Pamela Labonte sent out pre­liminary results at about 4:30 a.m. 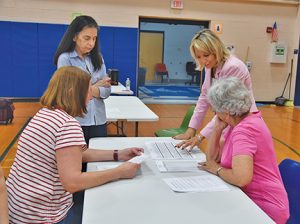 Acushnet Town Clerk Pam Labonte (STANDING, RIGHT) explains to poll workers how to conduct a hand count of all ballots and all races because the voting machines were down on election day in Acushnet, 5/14/122. Photo by Beth David.

Ms. Labonte said that for each election, the vot­ing machines have to be coded to be able to count the votes. The memory/coding packs are sent to the company for coding, along with the ballot information. The company then programs the packs for each race, and sends them back to the town.

As the election neared, she started to get a little worried when the packs did not arrive, but not too much because she has worked with the same company for years. Finally, on Wednesday, she reached someone from the company and they told her the memory packs were no longer available for that machine because the batteries had been caught up in the whole supply-chain issues with so many other products.

Ms. Labonte said she was not happy that no one had notified her. Especially since she has money in her budget for new machines. She only waited to buy those because she needed the census information to be complete so she would know how many machines to get.

Ironically, because she has used the old machines for so many years, she has a lot of replacement parts and whole machines ready to go in case of a problem.

“I have tons of spares,” she said.

The memory packs, however, are not something she can do. They have to be programmed by the company.

What’s especially frustrating, she said, is that the company knew about the problem last year. She would have had plenty of time to buy new machines.

Instead, her week was over­whelmingly difficult. She had to create forms for poll workers to use, and recruit workers who could stay all night to count votes. 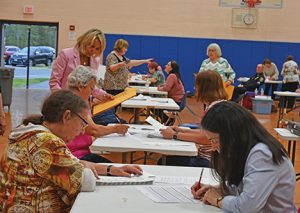 Poll workers hand-count votes, with one person reading from the ballot and the other marking the sheet, because the voting machines were down on election day in Acushnet, 5/14/122. Photo by Beth David.

About 10 tables were set up with two poll workers each. One read from the ballot, while the other marked the sheet. The long sheet had all the races with each name and a line for write-ins and going down the left. Across the top were 50 columns, as ballots were counted in blocks of 50.

A two-page set of instructions included everything from how to mark the ballots to how to handle bathroom breaks (the whole team has to leave the area and a police officer guards the ballots). Even the red pencils were regulated.

Observers from the campaigns were allowed, but none chose to send anyone.

Ms. Labonte said the process was not complicated, just tedious.

*The results of the election had not been certified by press time. They should be certified by the end of the week.