If your teenage son or daughter was using drugs and was using every trick in the book to hide it from you, would you know what to look for?

Are you thinking that you’d be looking for little baggies, or pill bottles, or powdery substances spilled on the desk?

You might be better off looking for everyday normal things that any teenager would have in his or her room.

That was the message of a program called “Hidden in Plain Sight” at Fairhaven High School on Monday, 11/13, for adults only.

Sponsored by the FHS PTO and staffed by volunteers from the Nurses to Prevent Opioid Abuse, the program included a PowerPoint presentation and a sample bedroom. The bedroom included many of the items that teenagers use to conceal drugs.

The items include false bottoms on common items that teens would have (we are being vague on purpose), and fake items that actually conceal scales, or hidden compartments. And all of it can be purchased online or in stores.

“Anything with batteries is a hiding spot,” said Joe Dawicki, who helped explain the items in the mock bedroom. 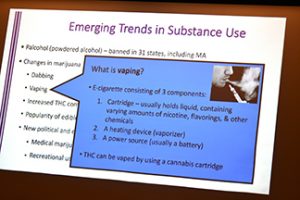 The presentation included explana­tions of the different ways people can consume drugs, such as dabbing (using heated hash oil for a concentrated THC level) and vaping, which vaporizes marijuana, virtually eliminating the telltale smell of marijuana smoke.

Kim Souza and Laurie LaPlante, both members of Nurses to Prevent Opioid Abuse, told the parents during the presentation that they were the best defense against drug abuse for their children.

“It seems they don’t listen to you,” said Ms. LaPlante. “But you are the biggest influence in their lives.”

She said communication is a parent’s “best weapon.”

Communicate: Talk to your children. Parental disapproval of substance abuse is the number one protective factor against underage substance abuse, according to the presentation. Let them know where you stand and that they can talk to you.

Educate: Keep up with trends and technology, and ask at the school about recent trends.
Protect: Lock up drugs and alcohol and medical marijuana. The program offers free drug lock-boxes.

Connect: Develop your relation­ship with your teen; share meals and family stories; maintain and establish traditions; get to know their passions, friends, teachers, and coaches.

Respect your teen and continue to get to know them as they change and grow; model positive behavior; talk to your teen, but listen too; be present, support your teen’s passions
Staying current on technology is also important, stressed Ms. Souza and Ms. LaPlante. They said that things change quickly. For example, as soon as Facebook became popular with adults, teens switched to Instagram and Snapchat. 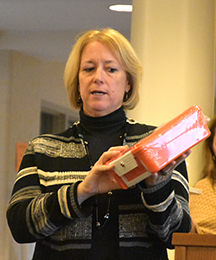 Kim Souza, a volunteer from Nurses to Prevent Opioid Abuse, holds up a drug lock-box at the “Hidden in Plain Sight” presentation at Fairhaven High School on Monday, 11/13. Photo by Beth David

When one teen is banned from using a cell phone, he or she very often can just use a friend’s, because teens share the family wifi password freely with their friends. They also have other ways of getting around a no-technology punishment.

“So just be up on technology,” said Ms. Souza.

Timothy Francis, father of a teenage boy and Fairhaven’s Fire Chief, said he attended the event as a father, not the chief.

“Every now and then, you might learn a new trick,” he said.

The town has Narcan, the drug that revives people who have overdosed. Chief Francis said Fairhaven para­medics use it more often than should be necessary.

Tracy Francis, a member of the Wood School PTO, said she was there as a concerned parent of a 13-year-old and a 10-year-old.

She said she did learn something about how certain bottles and cans can conceal drugs.
She said she knows that even in middle school, her children are exposed to other students who use drugs, or know someone outside the school who uses drugs.

She said she has spoken to her daughter about it.

“It’s still there,” she said. “They’re still exposed to it every single day. Peer pressure is strong.”
To learn more about the program, email Kim Souza at kskimsouza@ gmail.com