Fairhaven held a household hazardous waste day, giving residents a chance to properly dispose of toxic chemicals that are difficult to get rid of. On Saturday, 10/26/19, almost 200 cars arrived at the public works barn to turn in old paints, aerosols, weed and bug killers, and other substances that tend to accumulate in basements, sheds, and under the sink.

According to Fairhaven Health Agent Mary Freire-Kellogg, 187 cars went through the line. Residents dropped off a total of 1 large box of aersol paint; 1 box of propane; five paint related toxic subsances, such as paint thinners and stains; eight flammable liquids; one corrosive acid; pesticides, both solid and liquid; batteries.

Recolor Paints, Inc., was also on hand to accept latex paints that could be recycled. The company recolors the paint and sells it at a discount to municipalities and organizations such as Habitat for Humanity.

Residents dropped of 10,000 pounds of paint that will be reclaimed.

MXI Inc. out of Pennsylvania handled the collection of the hazardous materials, sorting and empyting out the liquids that could be used as fuel.

Craig Potter of MXI said that the oil based substances would be used to fire a waste-to-energy plant. Any other materials that can be re-used would be sorted out.

“I had too much fun today,” said Mr. Potter, noting that he is usually counting, not actually pouring out cans. “I actually got to crack open cans.”

Ms. Kellogg said the company was very accom­modating with the changes this year. The operation was moved to the back of the building and cars were routing around the public works barn. It was a smooth operation, she said.

Fairhaven resident Al Costa said it was his first time using the service. He got rid of some antifreeze and other chemicals.

“I thinks it’s a great idea,” said Mr. Costa, noting that his wife saw the ad in the Neighb News.

He said the substances just accumulate over the years, and they hang onto it until “something like this” comes up so they can get rid of it.

“I hope they contnue it,” said Mr. Costa.

John Reth got rid of oil, antifreeze, “miscellaneous engine products,” and some latex paint. He said he had been trying to get to one of the disposal days for four years, but kept missing it. Some of the items have been sitting around for years.

John Koska and his son Mike took in a bunch of antifreeze, lead paint, and other chemicals that had spend “a lot of years in the basement,” said Mike.

“I don’t throw anything out,” said John.

“It’s great having this,” said Mike. “Otherwise what the hell do you do with this stuff?”

“It is great,” he said. “Years ago, everything went right in the dump.”

Ms. Kellogg had a couple of volunteers to help her count cars and keep track of some of the items coming it. Karen Beaston of Fairhaven is part of the Medical Reserve Corps, and said it was a good chance to get in some volunteer time where she lives.

Reid Santos of New Bedford is interning with the health department, so it was all part of her learning process.

Ms. Kellogg said the program now has its own line item to be held every year, but the budgeting has been moved to the public works department.

The town will also be accepting broken string lights this year to keep them out of the trash, where they tend to wrap around machinery. 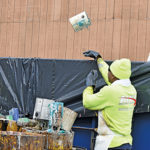 Cliff Gray tosses an empty can that contained oil based paint into a dumpster at the annual Household Hazardous Waste Day at the Fairhaven public works department on Saturday, 10/26/19. The paints are emptied into big drums and eventually burned to fuel a waste-to-energy plant. Photo by Beth David. 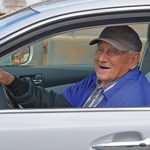 John Costa gives a big smile to the local free sheet, where he learned about the Household Hazardous Waste Day at the Fairhaven public works department on Saturday, 10/26/19, which allowed him to get rid of some antifreeze and other chemicals. Photo by Beth David 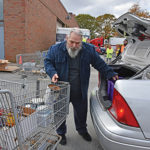 John Reth takes out paints, antifreeze and assorted engine products from the trunk of his car at the annual Household Hazardous Waste Day at the Fairhaven public works department on Saturday, 10/26/19. Photo by Beth David. 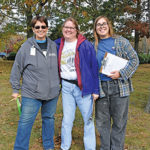 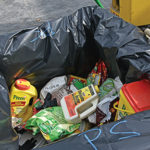 A collection of lawn chemicals almost fills the box to be properly disposed of at the annual Household Hazardous Waste Day at the Fairhaven public works department on Saturday, 10/26/19. Photo by Beth David.