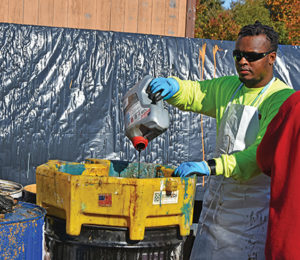 An MXI worker pours oil into a large barrel from a smaller jug that was turned in during Household Hazardous Waste Day in Fairhaven on 10/23/21. Photo by Beth David.

Fairhaven’s Household Hazardous Waste Day collected a variety of hazardous chemicals from 228 cars that took advantage of the option to properly dispose of hazardous waste for free on Saturday, 10/23/21 from 8 a.m. to noon.

A joint effort of the Health Department/Board of Health and the Board of Public Works, the day allowed Fairhaven residents to clean out their sheds, basements, and houses of pesticides, harsh cleaners, oil based paints and stains, fertilizers and batteries.

Health Agent Dave Flaherty and board of Health Chair Peter DeTerra both said the cars were lined up all along Arsene Street straight out to Route 6 by 7:30 a.m.

He said it was no surprise that it would be so busy since last year’s day was canceled due to the pandemic.

Denise from MXI, the company collecting the waste for disposal and/ or recycling/reuse, said they were mostly seeing oil and oil-based paints.

“Nothing too weird,” she said. 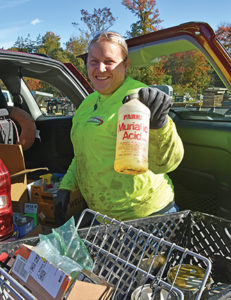 Denise of MXI holds up a jug of the harsh/toxic cleaning agent Muriatic Acid during Household Hazardous Waste Day in Fairhaven on 10/23/21. Photo by Beth David.

Project Manager Brian Pawlowic said workers were sorting the materials according to how flammable they were. Oil based liquids and gas will be burned or will be processed to remove the ethanol which will be burned for heat. Pesticides will be disposed of. Cleaners are neutralized and disposed of.

“Wherever we can, we try to recycle s much as we can,” said Mr. Pawlowic.

sNancy Alves said she mostly had household cleaners to dispose of, some old bug sprays and garden chemicals, that came from her basement.

“I’m very, very, very glad they are having this,” said Ms. Alves, noting it had been “a few years” since she had disposed of hazardous waste.

Fernando Lemos said he cleaned out his basement, mostly disposing of paints and solvents.

“It’s been really good,” said Mr. DeTerra, as he directed cars to the recycle center or the hazardous waste disposal site behind the BPW garage.

Since the BPW took over the recycle budget, it is actually their responsibility to hold the Hazardous Waste day, but the Board of Health still helps out, he said. 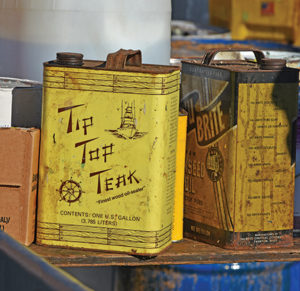 This very old can of Tip Top Teak, a boat deck sealer, is among the items turned in during Household Hazardous Waste Day in Fairhaven on 10/23/21. Photo by Beth David.

Mr. Flaherty said he is hoping the event can become yearly instead of every other year.

Meanwhile, the Fairhaven Recycling Center accepts batteries and some other items for a fee. Contact the BPW, 508-979-4030, or the Health Department, 508-979-4023, Ext. 125, for information on what is accepted and what is not. Visit the health department online at https:// www.fairhaven-ma.gov/board-health or the BPW at https://www.fairhaven-ma.gov/public-works-department