Fairhaven Harbormaster Timothy Cox got help from the Fairhaven Police Department on Tuesday, 5/29, when a man who had dug some mussels allegedly threatened Mr. Cox with a knife at about 1:30 p.m. Accord­ing to officials, Zachary Fournier, 26, of Pascaog, RI, was taken into custody and might face criminal charges.

Mr. Cox said he came up on Mr. Fournier at the corner of Cherrystone and Balsam Streets on West Island, as he was rinsing off mussels in water from the fire hydrant. The public works department has been flushing the system. Mr. Cox approached and asked Mr. Fournier if he had a license.

He seemed surprised that he would need one for mussels, but Mr. Cox said if he is digging in Fairhaven, he needs a town license. Mr. Fournier said the Mr. Cox was making him nervouse, and Mr. Cox said he kept his distance.

“Then he sait, you’re making me nervous and you’d better step back or I’m going to stab you,” said Mr. Cox, who decided it was wiser to call the police and not get stabbed over mussels.

The police arrived and took Mr. Fournier into custody. He said he had paddled over in a red kayak with a black seat and blue paddles that he had taken from Mattapoisett without the owner’s knowledge.

But Mr. Cox and the police were unable to locate the kayak.

It is unclear what charges Mr. Fournier may face. 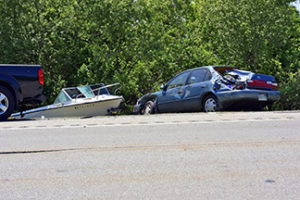 This accident on Route 240 in Fairhaven at about 12:40 on Wednesday, 5/30/18, involved a pickup truck pulling a boat, this Toyota Corolla, and a Pontiac minivan. Four adult males were taken to the hospital, three to Rhode Island Hospital, the region’s trauma center; one was taken by helicopter. Photo by Glenn C. Silva.

In another incident, a multi-car accident on Route 240 resulted in four people being injured, three of them seriously. At about 12:40 p.m. on Wednesday, 5/30, a 1997 Red Pontiac minivan, 1996 blue Toyota Corolla, and a 2006 black Nissan Frontera pickup truck, along with a small motorboat and trailer, were all involved in a crash.

Fairhaven Police spokesperson, Lt. Kevin Kobza, said the reconstruction was not complete, but it appeared that the truck hauling the boat had a blowout. Two men were trying to figure out what to do, with one inside the boat and the other alongside it, when they were hit by the Corolla.

It appears that the minivan, Corolla, and a witness, were all traveling south on 240. The minivan changed lanes and hit the Corolla, which then hit the truck/ boat on the shoulder of the road. All three vehicles and the boat ended up in the trees. The man who was inside the boat was thrown and faces the most serious injuries. The man who was on the road by the boat got pinned under the trailer and had to be extricated. The minivan driver and the Corolla dirver were also injured.

The names of those involved was not available by press time. They were all adult males, said Lt. Correia.