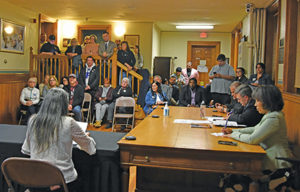 Candidates and supporters listen as Fairhaven Town Clerk Linda Fredette reads off the unofficial numbers in the Banquet Room of Town Hall after the polls closed on Monday, 4/4/22. Photo by Beth David.

Election Day, 4/4/22, ushered in some big firsts for Fairhaven: The town’s new Town Administrator, Angeline “Angie” Lopes Ellison, started on the job that day; the Select Board officially became a five-member board, expanded from three; and Leon Correy, who received the second highest number of votes, made history as the first African American to hold a seat on the Select Board, well, at least as far as we can tell. 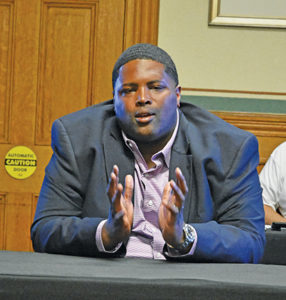 Leon Correy III addresses voters after coming in second for Fairhaven Select Board on 4/4/22, winning a two-year term. Photo by Beth David.

Mr. Correy shares the distinction of being the first person of color to serve on a townwide elected board with Ann Pinto, a Cape Verdean woman who served on the School Com­mit­tee from 1993 to 2001, when she resigned just a year short of the end of her third term. And Ms. Elllison, Fairhaven’s new Town Adminis­trator, is also Cape Verdean. She is the second TA since the town changed its form of govern­ment in 2015.

Voters also re-elected Stasia Powers to the SB. She is only the second woman to serve on that board in the town’s history.

Charles K. Murphy, Sr., won the third spot on the board, regaining a seat after losing his re-election bid in 2020. 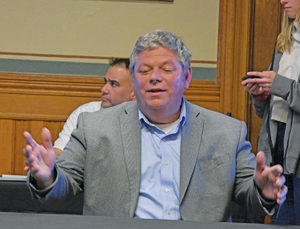 Incumbent Peter DeTerra addresses voters after coming up short and losing his seat on the Fairhaven Board of Health on 4/4/22. Photo by Beth David.

The big upset, though, was Board of Health, where incumbent Peter DeTerra, who has served on the board for 18 years, was unseated by newcomer to politics Heidi Hacking, 1725 to 822.

Voter turnout was 21%, an im­prove­ment on previous years, but still low. Fairhaven had 12,211 registered voters on election day.

Keeping with Fairhaven tradition, Cable Access TV held the annual event in Town Hall after the election, when all candidates, win or lose, are invited to speak to voters directly.

Mr. DeTerra had a smile on his face as he addressed voters. He thanked his family, his wife, and also the voters for electing him for the last 18 years. He noted that he knew most of the people in the room and it was great working with everyone.

He also congrulated Ms. Hacking, saying she “did a great job.”

Ms. Hacking said it was “a little overwhelming right now,” her first time getting involved in politics. 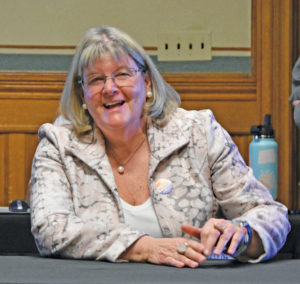 Newcomer to politics Heidi Hacking addresses voters after ousting the incumbent in a huge upset in the Fairhaven Board of Health race on 4/4/22. Photo by Beth David.

She thanked Mr. DeTerra for his years of service, and her campaign workers, volunteers, and the voters.

She said she met wonderful people as she knocked on doors campaigning.

“It really kind of confirmed that we have a wonderful town with wonderful people in it,” said Ms. Hacking. “So now the work begins.”

She also repeated a quote: “‘We inhale the past and we exhale the future,’” she said, adding, “And we move forward.”

All five Select Board candidates were in the room and addressed voters.

Ms. Powers said her team was “amazing,” and she was grateful for all they did, noting that they ran a campaign twice in just eight months. She was elected in the Recall Election last June.

She said her volunteers were “tremendous in every way,” and thanked her family. 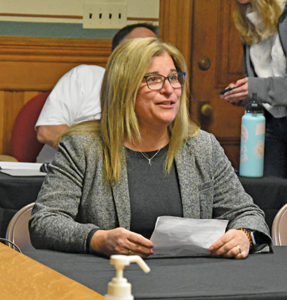 Stasia Powers addresses voters after getting the most votes for Fairhaven Select Board on 4/4/22, winning a three-year term. Photo by Beth David.

To voters she said, “Thank you for the opportunity to continue to serve this town. I’ve had a great experience so far and I’m happy to continue the work we started.”

Mr. Correy started by saying it took “a long time to get here,” as he, too ran in the Recall Election last June.

He thanked his wife first, saying she did “absolutely everything,” and was an absolute “rock star.”

He thanked the usual list of friends and family, then added “everyone I met.”

“I feel like I met every single person who voted for me,” he said. “It was…it was special.”

Mr. Durant, who also ran in the Recall Election last year, said he felt that all the candidates officially became his friends, adding “What an interesting and different thing that is to say.” 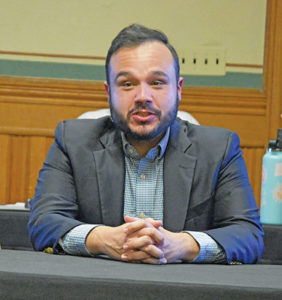 Cameron Durant addresses voters after coming up short losing his bid for aa seat on the Fairhaven Select Board on 4/4/22. Photo by Beth David.

He said he considers all the candidates “Fabulous additions to town, great public servants and people I’m hapapy to be associated with and to talk to and be freinds with.”

Ms. Melanson said she had a lot of fun, “but it was very exhausting, I do have to say.”

She thanked the voters and her team, adding, “My family? They just all thought I was crazy anyway.”

Through the laughter, she added: “I still say, whether I’m crazy or not, don’t count me out.”

“I have a lot of other things to do in this town,” said Ms. Melanson. “I’m going to keep on going.”

Mr. Murphy started by thanking God, saying he always thanks God first. And, of course, he added, “Not next to God, but close,” he thanked his wife Carrie.

Mr. Murphy said he got to know the candidates during the campaign and really appreciated all their contribu­tions and everything they have done and continue to do. 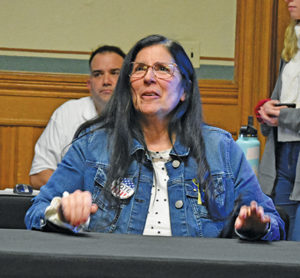 Cathy Melanson addresses voters after coming up short losing her bid for aa seat on the Fairhaven Select Board on 4/4/22. Photo by Beth David.

He said he appreciated the opportunity to serve on the board again, “And I really appreciate the people who ran.”

He also thanked his volunteers, and the voters and those who held signs, noting there were many cold days holding signs outside.

Mr. Murphy also said he looked forward to working on a five-member Select Board.

As we come out of the pandemic, he said, “We’re working together to continue to make Fairhaven the most amazing place we can, and I truly appreciate all your support.”

Mr. Murphy then moved to shake hands with Ms. Ellison, and SB members Bob Espindola and Keith Silvia, which all the other candidates had done before him. All three stood up as Mr. Murphy finished speaking. However, as he approached Mr. Silvia, hand outstreched, Mr. Silvia sat back down and put his hands in front of him, palms out, making it clear he had no intention of shaking Mr. Murphy’s hand. Mr. Murphy quickly turned away and went back to his seat with the public.

It is unclear if Mr. Espindola saw the exchange, or lack thereof. He took a minute to say that everyone wit­nessed what they heard from the five candidates about how the campaign was conducted. He said one of the most “touching” things he heard was when Ms. Powers lost her father during the campaign, the other candidates suspended campaigning that weekend. 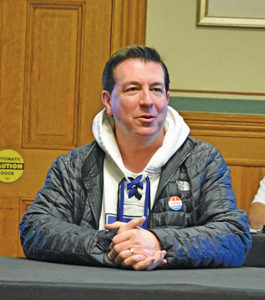 Charles K. Murphy Sr., addresses voters after coming in third for Fairhaven Select Board on 4/4/22, winning a one-year term. Photo by Beth David.

“Honestly that’s just telling,” said Mr. Espindola. “That just is the type of  people we have here in Fairhaven.”

Planning Board also had a contested election, with three people running for two seats, all new to politics. Top vote-getter was Kevin Grant with 1228 votes, Sharon Simmons with 1186, and Andrew Romano with 962.

Mr. Grant said he appreciated the opportunity to “get to work and hopefully have a positive impact on the town.”

He said a few in the room had reached out to him during the campaign and he appreciated it.

Mr. Grant also thanked his campaign maanger, his six-year-old son Jack, watching the proceedings even though it was past his bedtime.

Mr. Romano, who was also Ms. Hacking’s campaign manager, said he was not “overly sad” that he lost. “Because at the end of the day I did not have one sign made, I did not go to one campaign event and say ‘Hi I’m Andrew Romano and I’m running for Planning Board,’ and I still made it out with 961 votes.” 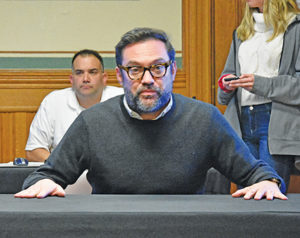 Kevin Grant gets ready to address voters after winning a seat on the Fairhaven Planning Board in the 4/422 election. Photo by Beth David.

He said they have not seen the last of him, he is only 24 and just getting started.

Ms. Simmons did not attend.

Other races were uncon­tested and included: Linda Fredette, previously Acting Town Clerk, won election to a full term; on the School Committee incum­bents Kyle Bueno and Erik Andersen were re-elected; Barbara Acksen was re-elected to her seat as Commis­sioner of Trust Funds; Louise Ponte, who was serving an unexpired term on the Trust Commission, was elected; Anne Smith won a seat on the Board of Public Works; and Gary Souza, who was serving an unexpired term on the Housing Authority, was elected to that seat.

*Numbers may be different from those announced on election night, as the Town Clerk’s office released official results on Tuesday, which include hand-counts and write-ins. 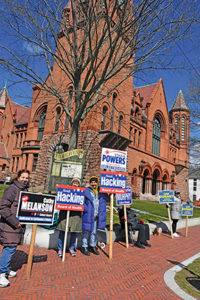