This info graphic shows the process for creating a Charter Commission in Fairhaven, which could ultimately result in big changes in the way town government is organized. Photo from Kyle Bueno’s Facebook page.

It has been six years since an appointed town government study committee recommended that the Town of Fairhaven adopt a town charter, a task which those commit­tee members determined was beyond the scope of its job, which was to gauge public opinion on the effectiveness of Fairhaven’s govern­ment and potential changes to its structure.

According to the TGSC’s 2014 report, 33% (489) of survey respondents approve of a town charter for Fairhaven while only 9% (128) disapprove; however, the 58% majority (861) answered that they have “no opinion” of developing a town charter, leaving comments such as “Thought we had one”, “What is it?”, “Unfamiliar with the concept”, “Would listen to a discussion on this”, and “Not sure.”

We are now in the final quarter of 2020, one of the weirdest years of our collective experience when many of us found ourselves, at least for a few weeks, with some significant blocks of free time for binging on TV, de-cluttering and organizing the home, or quietly ruminating on thoughts of doom and indulging in existential angst.

For Kyle Bueno, a Masters Degree in Public Administration student whose undergraduate degree majored in economics and minored in political science, he saw the pandemic, juxtaposed against the current political system both on the macro and microcosmic level, as an opportunity for citizen engagement and education.

“With COVID-19, it brings about a lot of opportunities to look at current things that are going on in,” said Mr. Bueno in a recent interview.

Because of the comments he had been hearing around town from other residents, he said he figured he would read up on the current processes that exist for citizens to initiate legislative change and find empowerment in participating in local government; however, what he found did not sound very empowering to him.

“What I started looking into was what is the process whenever we as a town are looking to make changes or amendments to our current bylaws and, as of right now, we have to always have a set number of signatures of voters in town and then we have to bring it to the state legislature for approval,” said Mr. Bueno. “When I heard that, I was like— we’re our own community. Why do we always have to have a certain amount of signatures on a petition … to then bring that to the legislature? To me that just doesn’t make sense. We’re Fairhaven, but we have to have [the state legislature’s] blessing if we want to make changes?”

Mr. Bueno is a homegrown Fairhavenite. He went to Rogers School, Hastings Middle School, graduated from Fairhaven High, and currently serves as a member of the Fairhaven School Committee. He undertook his independent review of the current status of Fairhaven government simply from his perspective as a citizen, he said, and from that perspective Mr. Bueno believes that what Fairhaven needs is a town charter. And he has initiated that conversation with the introduc­tion of a town charter commission petition to bring the issue to the election ballot.

What is a town charter?

To summarize, the Commonwealth of Massachusetts adopted the Home Rule Amendment to the State Consti­tu­tion in 1967 accompanied by the state statute known as the Home Rule Procedures Act establishing uniform procedures for municipalities to establish the framework for their government in the form of a home rule charter, which defines the town’s organization, its powers, the respon­si­bili­ties of its officials, and its relationship to its constituents.

No state legislative stamp of approval is required for a home rule charter to become law, and a charter is based on how its voting citizens choose to consolidate and clarify its structure of government. The process can be used to change elected positions to appointed ones, con­solidate and professionalize depart­ments, create term limits of elected officials, establish recall provisions to check elected and appointed officials, or create other municipal initiatives like, for example, placing a limit on where sex offenders may reside relative to areas where children and the public congregate. In a nutshell, the town, not the state, with the exception of certain overarching state laws, determines its course.

“Reading about the best changes we can make in our community, I said, you know what? We should have a charter,” said Mr. Bueno. “The people can have more control in their govern­ment and can have more of a say in the changes that they want to make.”

And what he wants to see happen in the process is apolitical, transparent community engagement where more than ever people feel empowered to participate in making the case for its own town charter — a local constitution, an “owner’s manual” of sorts that Mr. Bueno says would reduce inefficiencies in govern­ment, clarify reporting structures, establish accountability, and allow local changes without requiring a legislative petition every single time. 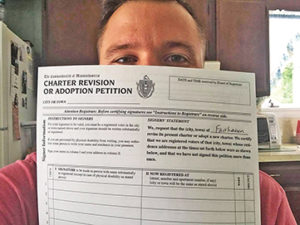 Kyle Bueno holds up a signature sheet for the Charter Commission petition he is working on in Fairhaven. Photo from Kyle Bueno’s Facebook page.

A charter, said Mr. Bueno, “signifies the soul of our community as an independent entity controlling our own destiny aside from the legislature.”

Fairhaven has grown, but the government structure has not grown with it, Mr. Bueno believes.

“We can learn from the successes of other communities and we can make government stronger, more accountable.”

For example, he says, a charter could potentially change the repre­senta­tion of seats on the Selectboard and adopt ways to enhance accounta­bility of board and committee members.

Some town charters impose ethics compliance requirements for elected officials and candidates and require campaign finance disclosures. Others have created a citizen participation enforcement position to advance communication and outreach between residents and town officials, and some established new local government financial reporting.

In its 2014 report, the Town Government Study Committee found that “[The] benefits of developing and adopting a Charter are substantial. Its primary value is that it would provide a single, organized, comprehensive document articulat­ing key aspects of the governance of the Town of Fairhaven. It would provide specific operational guide­lines for town officials, boards, and employees. The creation of a Commission charged with developing a Charter would constitute the initial step in making local government more transparent, efficient, responsive, and accountable.”

Mr. Bueno referred to the TGSC’s recommendations from 2014, several of which were subsequently rejected by Town Meeting such as abolishing the Board of Public Works and changing the town clerk position from elected to appointed; however, some of those recommendations did come to fruition, such as the town administrator position, to name just one.

He said that was a start, but there is still more work to do to help evolve the town into a well-functioning and accessible government that works for all residents.

The process begins with the peti­tion. Mr. Bueno needs the signatures of 15% of registered voters from the last election, which equals 1,725.

“When you consider a typical local election might only pull in 10% of voters in a slow year, this is a considerable effort,” said Mr. Bueno. “Throw in COVID-19, and it’s even more difficult because we cannot have public events to gather many signatures. That’s why we need all of you.”

Once the signatures are gathered, the town clerk has 10 days to certify the signatures before the petition is forwarded to the Selectboard, which has 30 more days to call for a ballot question at the next election.

Voters would be asked to vote to determine whether Fairhaven should adopt a town charter commission, a nine-member elected body that will be tasked with drafting the new charter. If they answer ‘yes,’ they continue on to the second part of the ballot question and select who should be on the commission. Citizens that want to be on the charter commission would have to fill out nomination papers within the legal timeframe ahead of the election in order for their names to appear on the ballot. If the question to adopt a charter commission fails, it dies; the candidate results are moot. If it passes, however, those elected to serve on the charter commission have 18 months to hold meetings, consult with the public, and draft a charter for voters to either accept or reject in a final referendum vote.

“The purpose of the charter commission is to really review what we have and recommend any potential changes for the voters to either approve or reject,” said Mr. Bueno. “The goal is to really make this as transparent, apolitical, and educational as possible. It’s an opportunity for the citizens to learn about how government works and what our current system is. I feel like a lot of residents in town, including I, want to learn more about what our structure is, and this is the most democratic and transparent way to get a charter for Fairhaven.”

Mr. Bueno acknowledged that it would likely be a challenge.

“But the beauty of this process is: no harm, no foul,” he said.

But with a charter, he added, “We can have more control over our government. We can allow more public participation into making thoughtful and deliberate conversa­tions about where we currently are and where we can be.”

“Bringing as many people into the conversation as we can is my goal, and I want this to be a united front with people,” he continued, empha­sizing the many potential opportuni­ties for public participation throughout the entire process of forming a charter. “I do feel a lot of people in our town love Fairhaven, and I do too. I really do.”

There is much to love about Fairhaven with its scenic coastline, history, extraordinary buildings, and vast outdoor recreational activities, enough for over 16,000 people to make the town their home; a population that is theoretically enough to make Fairhaven a city. According to the Massachusetts Municipal Association, most home rule charters are adopted by towns with a population of 10,000-20,000.

To learn more about Mr. Bueno’s efforts, contact him at kylebueno15@gmail.com.