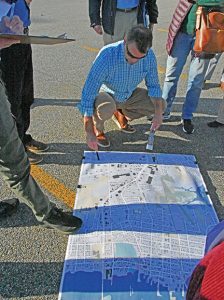 Fairhaven Town Planner and Economic Development Director Paul Foley points to an area on the map as the group visits one of the plazas while touring possible areas that might be considered for a 40R overlay zoning district in Fairhaven on Friday, 11/4/22. Photo by Beth David.

Fairhaven town officials, residents, and consultants, took a tour of several areas of Fairhaven on Friday, 11/4/22, and then met in town hall for a presentation and brainstorming session to explore the possibility of creating a 40R overlay zoning district in town. The district would allow for denser develop­ment of residential units or retail, or both, in certain areas. Residents also met on Saturday morning for another presentation and more opportunity to let town officials and consultants know what residents would like to see for development in town.

The three areas identified as possibilities are the Route 6/240 Plazas; the Route 6 Corridor/Rte. 6 from the plazas to Main Street; Main Street and Middle Street from Route 6 to Washington Street.

The purpose of the potential 40R District is to facilitate new commer­cial and residential development in previously developed areas while preserving the historic and rural character of the rest of the Town and guide sustainable economic develop­ment and build new capacity for growth in appropriate areas near transit and services.

During the tour of the areas, officials pointed out areas that are underutilized, such as large portions of some large parking lots, some empty storefronts, and some vacant lots.

Fairhaven Town Planner and Economic Development Director Paul Foley said residential units in any of the identified areas would be ideal for people who do not want to have a car. With the Boston train coming to New Bedford, a loop shuttle could easily take people to the train station over the river. The commercial spaces in the plazas would, presumably, have restaurants and retail shops.

Discussion turned to the change in the retail landscape. The large parking lots are no longer used as much as people use online delivery services to buy many products.

Some residents worried that small shops could not survive, and the thought of all chains and big box stores was not appealing to residents. 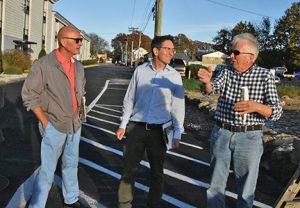 While at the end of Bridge Street near the Seaport Inn, (L-R) Bob McConnell and Dillon Sussman, Sr. Planner at Dodson & Flinker, listen as Nils Isaksen makes a point during a tour of sites in Fairhaven that might be suitable for a 40R overlay zoning district on Friday, 11/4/22. Photo by Beth David.

Consultants said that on their own, the small shops cannot survive, but creating new neighborhoods with residents living above storefronts, and public transit looping into the area, makes it possible for small shops to survive, and even desirable for them to locate there.

Construction of units could go up several stories in the plazas, affording water views to people in the upper floors.

The 40R would require 20% of residential units be affordable, but it was unclear if that would be a permanent designation, or for a number of years.

Architect Stephen Kelleher, one of the consultants, said that the existing buildings in the plaza areas were not very suitable for repurposing the way a 40R district would require. He said it is more likely that developers would build new.

The plan would be for the private sector to build the neighbor­hoods, with incentives from government to get them to do it.

The 40R Over­lay District would be extremely specific on what kind of buildings would be allowed, how high, for instance; what materials could be used, etc.

The idea, said consultants, is to create a neighborhood that would not only be desirable to live in, work in, shop in, but would also be a destina­tion for visitors.

During the slide show presenta­tion, Dillon Sussman, Sr. Planner at Dodson and Flinker, outlined some of the hurdles in the designated areas and in other places around town. 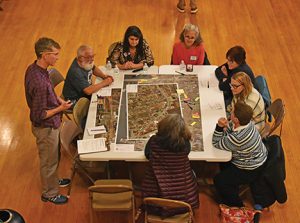 Fairhaven residents gather around a map to discuss the pros and cons of different areas in town that might be suitable for a 40R overlay zoning district on Friday, 11/4/22, while Jack Sweeney-Taylor of Dodson & Flinker (standing) listens. Photo by Beth David.

There are also physical constraints in some parts of town, such as existing housing, and flood zones.

The group also discussed the economy, the coming train service to Boston from New Bedford, the housing shortage and sea level rise.

The residents then broke into four groups at tables with large maps. They discussed the various possibilities in different parts of town and wrote out the pros and cons of different ideas.

The consultants will create a summary of the comments and discuss their findings with teh 40R Work Group. They will also create a video summary that will be available online.

Anyone who is interested in learning more about the 40R Overlay Zoning District and how it will affect Fairhaven, should email Mr. Foley at pfoley@fairhaven-ma.gov, or call him at town hall, 508-979-4023, Ext. 122.

Support local journalism, donate to the Neighb News with PayPa