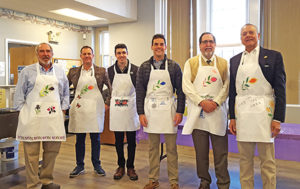 The Meals on Wheels Program is turning 50, and Acushnet Select Board members David Desroches and David Wojnar, Interim Town Adminis­trator Jamie Kelley, state repre­sentatives and others were on hand to help celebrate this milestone at the Acushnet Council on Aging on 3/22/2022.

The March for Meals celebration included brief statements by the aforementioned officials and a video highlighting Acushnet’s efforts to ensure its oldest residents stay connected and well fed through the program.

Acushnet COA Director Heather Chew noted that so many volunteers, including town officials, safety personnel and citizens, have given their time to this invaluable service.

“They all came together…. We never would have made it through the pandemic without them,” she said

Mr. Desroches emphasized that Meals on Wheels offers more than just a hot lunch to older people, especially since the COVID pandemic caused many to be isolated.

“Eight out of 10 communities are serving more meals to homes than before the pandemic,” said Mr. Desroches. 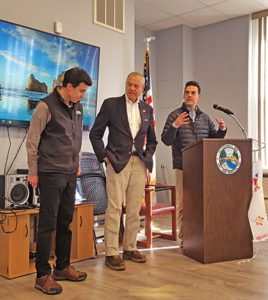 L-R: Kevin Hart from Rep. Bill Straus’s office, Rep. Paul Schmid, and Rep. Chris Hendricks attend a 50th anniversary celebration for Meals on Wheels at the Acushnet Council on Aging on Tuesday, 3/22/22. Photo by Lori Richard for the Neighb News.

He pointed out that the recipients “feel less lonely” and “are better able to live independently.”

More than half of them say they have no one else to check on them, he added.

Along with nutritional food, these seniors benefit from human contact. Ms. Nobre-Hilton said an average of 1400 meals is distributed every day in Greater New Bedford, and the seniors, who are often unable to leave their houses, can suffer from depression and anxiety. Meals on Wheels personnel give them opportu­ni­ties for socialization as well as safety checks.

In the near future, due to redistricting, Rep. Schmid will be replacing Rep. Hendricks repre­senting Acushnet, and both men noted they will work to provide a seamless transition to protect the interests of the town. They praised the hard work of those who run the program five days a week.

Mr. Hart echoed their sentiments, adding, “As someone from an Italian family, I recognize the importance of shared community and a good meal.” 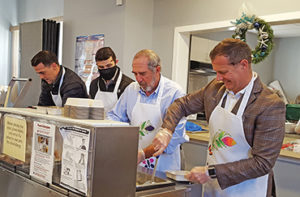