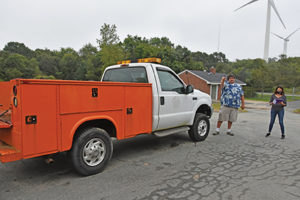 Marcus Ferro points to a bidder during the sale of a 2003 F250 Ford Utility truck that sold for $1,100 at the Fairhaven town auction on 9/18/21, while Kim Nogueira keeps track of who bought what. Photo by Beth David.

From old paper towel dispensers to welders, air compressors and generators, to motor vehicles, the town of Fairhaven unloaded a bunch of surplus property at its annual auction on Saturday, 9/18/21.

By far, the biggest draw of the morning was a 2002 bucket truck from the Tree Department. Wayne Morse nabbed that one for $6,000.

Another F-250 Utility truck with the front bumper and grill gone, sold to Wayne Morse for $900. Auctioneer Marcus Ferro tried to get $3,000 for it, but there were no takers. Starting at $100 and working up, the bidding had some real auction action for a bit. 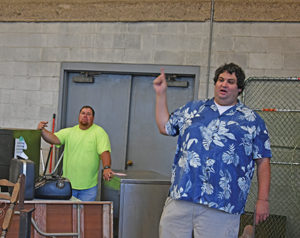 Public works employee Kyle Winderlick (left) clears out a spot around a stainless steel cabinet while Marcus Ferro keeps the bidding going at the Fairhaven town auction on 9/18/21, where the cabinet fetched $210. Photo by Beth David.

Paul Tavares got his newest acquisition started and was able to have it driven away. He paid $550 for a retired Council on Aging van that the town tried to get $6,500 for. When that opening bid had no takers, the bidding started at $100 for the 2008 Ford Starcraft 14-passenger van.

Mr. Tavares said he was contem­plating turning the van into a mobile hair salon for his wife.

About 14 bicycles showed some auction action, with real honest-goodness bidding from $1 to $25.

Workout and sports equipment had mixed reviews, with no takers on a leg curl machine, but sales on two bench presses, and a brand-name Nautilus machine that went for $10.

There were no takers for 100 student desks at the Rogers School.

Two welders also saw some auction action, with one going for $250 and the other for $175.

The town holds the auction every year in September. Last year’s auction was canceled due to COVID 19. The items come from a variety of places, including surplus equipment when departments upgrade, and aban­doned or stolen items found by the police department. The auction is handled by the Board of Public Works. 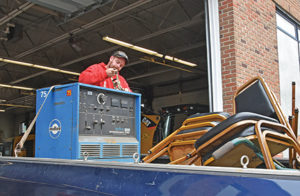 Zach Henault uses ratchet straps to tie down a welder he bought for $250 at the Fairhaven town auction on 9/18/21. Photo by Beth David. 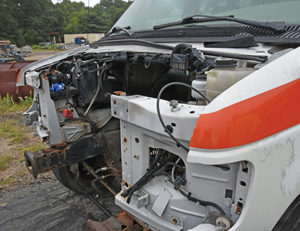 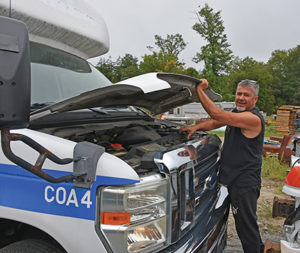 Paul Tavares flashes a big smile as he installs a battery in the 2008 Ford Starcraft 14-passenger van he got for $550 at the Fairhaven town auction on 9/18/21. Photo by Beth David.