Firefighters from Fairhaven responded to 260 Main Street at 7:12 a.m. on Monday, 10/21/19, for a reported oil burner backfire. While enroute, a second report came in that it was in fact, a structural fire involv­ing a two-story detached garage. The Acushnet fire chief, who was in the area at the time of the call, reported that smoke and fire were showing.

A first alarm assignment of two engines, one ladder, Chief 1 and 2 responded.

Firefighters were able to quickly knock down the fire and contain most of the damage to the first floor of the garage. An investigation into the cause and origin of the fire was conducted. Mutual Aid units from Acushnet and Mattapoisett Fire De­part­ments provided coverage while Fairhaven crews were operating at the fire. There were no injuries to firefighters or residents.

Damage was moderate, and unfor­tu­nately included the destruction of a 1962 Pontiac Bonneville, which had recently been restored. The esti­mated total dollar loss is $100,000 including the structural components and its contents. Smoke detectors were present and alerted the occu­pants of the detached residence.

The fire is suspected to be caused by a malfunctioning air compressor. The property is owned by Raymond and Joyce Oliveira. 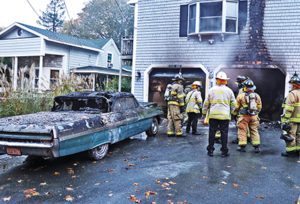 This 1962 Pontiac Bonneville is a casualty of a garage fire at 260 Main Street in Fairhaven on Monday, 10/21/19, that caused an estimate $100,000 in damage, but no human injuries. Fairhaven Fire Department photo.